Today I reach a milestone here at Iola’s Christian Reads. Actually, I reach two. I think. 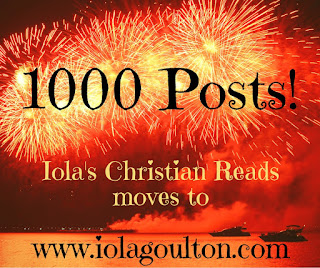 I started Iola’s Christian Reads in September 2011, after winning an ebook in an online giveaway. I’d just bought a Kobo (Kindles weren’t yet available here in New Zealand), and was keen to build my electronic library.

The book was delivered via NetGalley, and I found that I could get free ebooks from many of my favourite authors and publishers if I promised to write a review on a blog, and on sites such as Amazon.

Paperbacks cost around $30 each in New Zealand at the time, so this seemed like a good deal.


This is my 1,000th post at Iola’s Christian Reads. Most of those posts have been book reviews, but there have also been links to reviews on other sites (such as Australasian Christian Writers and Suspense Sisters Reviews).

My top reviews (in terms of the number of views) have been:

I have this blog, two websites, and a dozen social media profiles. I'm also a regular contributor to two other blogs.


I’m finding it hard to keep up. Something has to give.


So that’s today’s other milestone: as well as being the 1,000th post here at Iola’s Christian Reads, this will be the last.

It will be the last post for 2017. I will take some time over Christmas to pray and consider my direction for 2018.

I’ll have a regular blogging schedule:


I’ll tell you a little more about #FirstLineFriday next week, over at www.iolagoulton.com.

Meanwhile, please join me at www.iolagoulton.com to keep reading my reviews. Add me to your blog feed list.


And thank you for all your comments and support over the last six years.

Lizzy Cotton signs up as a mail order bride to marry a handsome cowboy and fall in love. The adventure starts well, when she arrives at her destination with four other mail order briders. Her husband, Richard Shand, is even more handsome in person than in his photograph. But he doesn’t seem at all interested in being a real husband. Instead, he leaves her alone on the ranch all day, with only one of the cowboys for company.

Lizzy was a likeable heroine, if a little naïve (delusional?) at the beginning. She was almost annoying in her Pollyanna-like cheerfulness and optimism, and her overly romantic ideas about living in the West, marrying a cowboy, and falling in love. She’s got it all planned out, but you know what they say about plans …

Richard was not nearly so likeable. In fact, he was downright unlikeable in the way he advertised for a mail order bride, married her, then ignored her. And I don't know what else to say about him that wouldn't be a spoiler. Let's just say there was a big twist, and while I knew something was coming, my guess was about 90% wrong.

There was plenty of romance—but the course of true love definitely doesn't run smooth.


There's conflict (plenty of conflict), but also a lot of laughs as Richard and the other cowboys underestimate Lizzy in many ways. Yes, she's way more than a Pollyanna.

The Wayward Heart is the third book in Nerys Leigh’s Escape to the West series, but the books can be read in any order. They all take place in the same town over the same timescale, with each book focusing on one of the mail order brides.

Overall, The Wayward Heart is a Christian Western historical romance that's got everything: intelligent and likeable heroine, intelligent and gentlemanly hero, conflict, laughs, and a thought-provoking Christian theme.


Thanks to the author for providing a free ebook for review. You can find out more about Nerys Leigh at her website, and you can read the introduction to The Wayward Heart below:

Today I'm reviewing Beneath Copper Falls by Colleen Coble over at Suspense Sisters Reviews. Click here to join me! 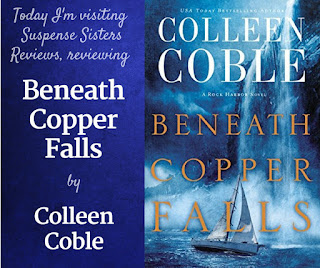 Book Review: Out of the Shadows by Emma Carrie

Teenager Emily Brelin’s adoptive mother has just died, and now Child Protective Services needs to find her a place to live. At least, that’s what they think. Emily needs to stay off the grid, to make sure her past doesn’t find her. That means staying out of the system.

Detective Victoria Tacket didn’t even know her friend Dr Jennifer Brelin was ill, let alone that she’d adopted a teenager. And why has Jen nominated her as guardian? She’s not fit to be a parent—which she tells CPS. But then Emily disappears, and Vick knows she has to find the missing teen.

Emily is a fascinating character, with more skills that people would expect for her age—including the ability to lip-read. She takes the lead in this game of hide and seek, and her willingness to run away and disappear introduce a lot of questions. Who is Emily? Why is it so important she stays out of the system? Who is looking for her … and what will happen if they find her?

This is the first book in a series—thank goodness, because I want to know what happens next! It doesn’t end on a cliffhanger, but the end definitely leaves some unanswered questions for future books. (Cliffhanger endings too often give me the impression the author didn’t know how to finish the book, which breaks the illusion that it’s real).

Out of the Shadows is a fast-paced read with plenty of suspense. The plot and writing are solid, and the characters are excellent. If there was a failing, it was that it was too quick to read (I read it in a single sitting, because I couldn’t put it down). Not a novel to start late in the evening …

Thanks to the author for providing a free ebook for review. You can find out more about Emma Carrie at her website, and you can read the introduction to Out of the Shadows below:

My Brother Tom
(By Wombat Books, 1 April, 2017)
By
Michelle Worthington 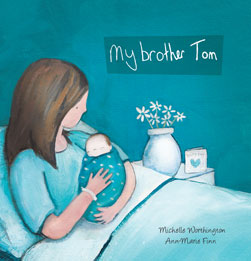 
Tom was born earlier than expected and had the doctors worried. His big brother wasn't worried though, he saw angels outside his window and knew everything would be okay.
My Brother Tom is a story for older siblings of premature babies to help them make sense of what is happening at a difficult time. Michelle is an author of children’s books, who is also available for workshops on writing for children, book signings and school readings.
Michelle Worthington was born in Brisbane, Queensland and currently works and lives in the Redlands. She enjoys travelling and has spent time studying in France where she lived for a year.
Winner of the 1988 Little Swaggie Award and other Australian poetry competitions, she has been published in numerous Australian and International poetry anthologies. Since a very early age, Michelle has shown a love of words and rhyme, and has always excelled at English and Creative Writing. Graduating with a Bachelor of Arts from University of Queensland in 1996, Michelle is currently undergoing studies to further her career as a published author and book publisher.
Australian publisher, Wombat Books has released her first children’s picture book titled The Bedtime Band. It is the story of what the animals in the Australian bush get up to when children are at home asleep in their beds. Michelle has two sons, Jordan and Cody, who she has read to every day since they were born, as she believes in the importance of fostering a love of books in children. Her books encourage children to use their imagination and dare to dream big. Michelle’s other titles are available at www.michelleworthington.com.

I don't have a review of My Brother Tom ... because I forgot to request a review copy. My bad. If you'd like to read a review, click here to check out Beth's review.
Posted by Iola at 08:00 1 comment: