A Real Story of Messed-Up People

Angela has just moved into the neighbourhood. She’s in her mid-forties, and is just starting to get her life straightened out. She’s graduated college, become a Christian, and is about to start her first job in a new town. Mitch is a house-flipper currently restoring a house across the street. And Bianca is another neighbour—one with no patience for do-gooders—but whose life gradually becomes more and more connected with Mitch and Angela.

I’ve read several of Jennifer Slattery’s books, and have enjoyed some more than others. This is definitely one I’ve enjoyed more, both for the realism of the characters and for their spiritual journeys.

Restoring Love has a cast of imperfect characters (on that note, I have to disagree with the reviewer who compared Jennifer Slattery’s writing to that of Karen Kingsbury. Karen’s characters are all too close to perfect for my taste, and I find her writing melodramatic. I prefer Slattery's broken world). Mitch is a Christian, but someone who became a Christian well into his adult years and who still faces challenges from decisions made before he became a Christian. 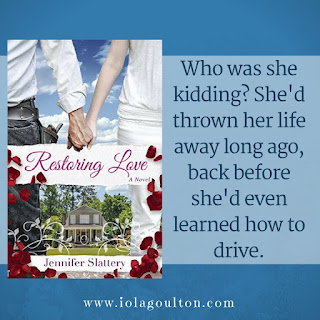 Angela is a new Christian with a lot to learn, and we see her change as she grows up throughout the course of the novel. Yes, she’s about to become a grandmother, but there are ways in which her daughter is more mature than she is. And then there are the non-Christian characters who … but that would be telling.

I did get frustrated with Angela and her inappropriate wardrobe choices. Even without getting into the whole ‘Christian modesty’ argument, I thought someone could have taken her aside and said the 1980's are over, and the styles look even worse on a middle-aged woman. Someone, anyone. Her daughter, a work colleague, a teacher, a church member … someone. But someone who could say it in love, not in judgement (I remember 1980's fashion. It hasn't aged well).

One thing that impressed me was the way Christian love was shown. When one minor character did act in a judgemental manner towards Angela, it was shown as inappropriate—even though many Christians might not see it as such. I was also intrigued by the relationship between Mitch and his business partner, which showed another side to the old Christian adage about not being unequally yoked with unbelievers.

The one thing that didn’t quite fit was, oddly, the title. I suppose “restoring” is partly a reference to Mitch’s occupation of restoring and flipping old houses, and love is obviously finding love (yes, there are romantic elements). But I thought the book was going to be about restoring an old relationship, whereas it was more creating new relationships, with God and with people. No matter. That didn't affect my enjoyment of the novel.

Recommended for those looking for Christian fiction with a heavy dose of real life.

Thanks to New Hope Publishers and NetGalley for providing a free ebook for review. You can find out more about Jennifer Slattery at her website, and you can read the introduction to Restoring Love below: