A Must for Christian Regency Romance Fans!

Lord Trent Hawthorne has just got married … a forced marriage of honour to Lady Abigail Bell, daughter of one of the most irritating women he knows. Being forced into marriage to salvage Abigail’s reputation isn’t how he’d planned on marrying, but it’s a done deed and he has to make the best of it. But he has no idea how to be a husband.

And Abigail has no idea how to be a wife. All she knows is that she doesn’t want to be the kind of wife (or mother) her mother is. After an awkward first week of marriage, Trent decides they need to get to know each other before they can have a real marriage, so he decides he needs to court his wife. An uncommon courtship, to be sure.

Trent is a true gentleman. He’s been forced into this marriage, but is determined to get to know Abigail and turn it into a real marriage. He makes a lot of mistakes, but he’s always willing to fix them (once he actually realises he’s made a mistake. He is a male, so that sometimes takes a while).

Abigail also makes her share of mistakes, although she isn’t as good at fixing them. Not because she doesn’t want to, but more because she’s spent her life being dominated by her mother and doesn’t actually know how to deal with Trent—who is the complete opposite of her unprincipled mother. Mother is a piece of work, and it’s good to see both Abigail and Trent learn how to deal with her. 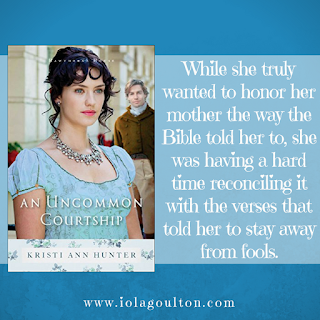 This is Kristi Ann Hunter’s fourth book in this series, and it’s as good as the previous stories (and has the advantage of being able to be read as a standalone novel—Trent and Abigail dominate the first part of the novel, while the characters from the earlier stories are reintroduced in the second half).

Thanks to Bethany House and NetGalley for providing a free ebook for review. You can find out more about Kristi Ann Hunter at her website
Posted by Iola at 08:00