Australian Christian Readers Blog Alliance
is introducing
The Greenfield Legacy
(Even Before Publishing October 2012)
by
Rose Dee, Amanda Deed, Meredith Resce and Paula Vince
Available from Light the Dark With a contest which ends
14 February 2013. 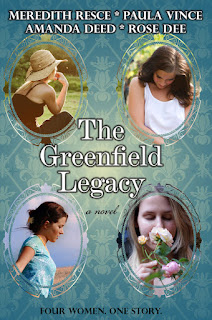 Mattie was in love with Billy, but she was too young to wed. When Billy was conscripted to fight in Vietnam, they made a decision that affected their lives and their future. But so much pain resulted that Mattie never really healed. Every turn Mattie made affected her daughter and her granddaughter in ways she didn't even realise. But forty-six years later, is it time for things to be set right?

Navy is a young woman who has never known her family. But what could be a wonderful opportunity is met with jealousy and apprehension from her cousin Brooke and her aunt Connie, especially with handsome Aidan around. Each must look past their struggles and find forgiveness and trust and perhaps even love. 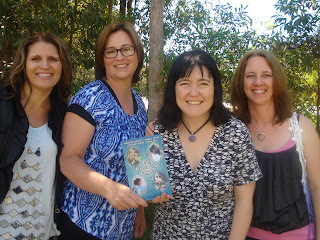 Left to Right: Rose, Meredith, Paula, Amanda.
Award winning Australian author, PAULA VINCE, loves to evoke tears and laughter through writing fiction. She has a passion to provide inspiring stories that highlight her own beautiful country. http://www.appleleafbooks.com
ROSE DEE was born in Ingham, North Queensland, Australia. Her childhood experiences growing up in a small beach community would later provide inspiration for her first novel. Rose, who holds a Bachelor of Arts Degree, decided to try her hand at writing two years ago. The result of that attempt is her first novel, 'Back to Resolution'. Her novels are inspired by the love of her coastal home and desire to produce exciting and contemporary stories of faith for women. 'Beyond Resolution', and ‘A New Resolution’ are the second and third books in the 'Resolution' series. Rose resides in Mackay, North Queensland with her husband, young son, and mischievous pup, Noodle. http://rosedee.com
AMANDA DEED grew up in the South Eastern suburbs of Melbourne in a Christian home, and found faith at an early age. She has followed her passion to serve the Lord through music and literature since her teen years. Now married, with three children, Amanda enjoys the variety of being a mother, finance administrator, musician and historical romance writer. Her debut novel, The Game, won the 2010 CALEB Prize for fiction, and Ellenvale Gold was a finalist for the same prize in 2012.http://www.amandadeed.com.au
South Australian Author, MEREDITH RESCE, has been writing since 1991, and has had books in the Australian market since 1997. Following the Australian success of her “Heart of Green Valley” series, an English Publisher has taken the first three books in this series, and has released them to the British and American markets. ‘The Greenfield Legacy’ is her 15th novel published. Apart from writing, Meredith also takes the opportunity to speak to groups on issues relevant to relationships and emotional and spiritual growth. Meredith has also been co-writer and co-producer in the 2007 feature film production, “Twin Rivers”. With her husband, Nick, Meredith has worked in the ministry since 1983. Meredith and Nick have one daughter and two sons.

Mattie’s life changed when her fiancé didn’t come back from Vietnam. She was forced to give up their baby daughter for adoption, and has never forgotten that despite her marriage to (and divorce from) Doug, the birth of her second daughter, Connie, and her successful management of the family vineyard, the Greenfield Estate. But now she has been contacted by the daughter she gave up.
Connie has always resented her mother for breaking up their family, but neither her husband, Dennis, nor her daughter, Brooke, understand her drive to succeed. When her mother calls and asks her to visit, she resists but goes at the insistence of Dennis and Brooke. But when Connie arrives, she finds more than she expected.
Brooke is currently studying fashion design, and it looks like this will be the fourth course she drops out of. She jumps at the chance to visit Grandma Mattie and the Greenfield Estate—and to reconnect with Aiden, the boy she left behind. But will their history be too much to get over?
Navy is Annette’s daughter, but hasn’t seen her mother since she abandoned their family years ago. Now Annette is ill and has asked to see Navy again, to reconnect with her daughter. When Navy arrives, she meets the grandmother she never knew she had—and a new aunt and cousin who are not pleased to meet her.
Four women, with four very different backgrounds, all related in some way to Annette, and all struggling to understand what those relationships mean. Will they be able to move past their issues to restore broken relationships and find love? The Greenfield Legacy is a fascinating mix of relationships and romance, with an underlying Christian message, and its’ share of humour.
At first I thought The Greenfield Legacy was going to be a four-in-one novella collection, but it isn’t. It’s a single novel, with each of the four points of view written by a well-known Australian Christian fiction author. I have to really congratulate them on how well the stories fit together – I was able to pick who wrote which bit (will you?), but if I hadn’t known, I would have thought it was all written by one person. Recommended.
Thanks to Even Before Publishing for providing a free ebook for review, and for asking me to be one of the proofreaders.