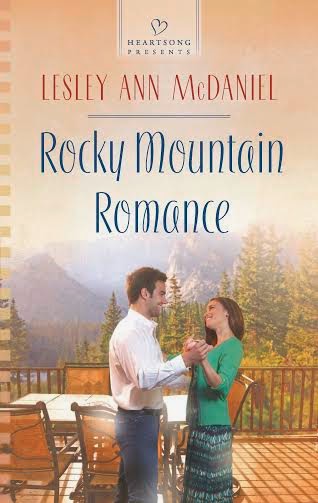 SHEILA MACINTOSH IS HEAD OVER HEELS FOR BEN JACOBS

But they haven't spoken since his sister Courtney's wedding last summer. Now that they're back together again on Courtney's Montana ranch, Sheila's wondering if she only imagined that Ben cared for her—and their time together was just a beautiful dream.

Ben's crazy about Sheila, but he's too shy to tell her, and he's praying for another chance to win her affections. Can this sweet computer expert overcome his shyness and show her that sometimes dreams really do come true? While earning a degree in acting, Lesley Ann McDaniel fell in love with theatrical costuming, and pursued that as a career while nurturing her passion for writing on the side. Through God’s guidance, she has shifted her focus to honing her skills as a writer of women’s and young adult fiction. She is a member of the Northwest Christian Writers Association and of a wonderful critique group. A native Montanan and a Big Sky girl at heart, Lesley now resides in the Seattle area.

1.    Can you tell us something interesting readers may not know about you?

Well, people might not know that I’ve worked in professional costuming for years. I’ve worked on lots of Broadway tours, and a few movies. Observing people in this crazy business has proven helpful in developing characters for my books.

2.    Where did you get the inspiration for "Rocky Mountain Romance"?

The inspiration for my “Montana Hearts” series basically came from growing up in Montana, even though I’ve never lived anywhere near a ranch. The idea for this particular book pretty much sprang up from the first book in the series, “Lights, Cowboy, Action”. That was where I first met Sheila and Ben, and decided it would be fun to develop their story.

3.    What did you find most fun in writing these books?

The most fun thing about writing this series was getting to escape to Thornton Springs, Montana. It’s a fictional town, but it was inspired by a couple of real places in Montana. I could easily live in a small town, although of course there’s an advantage to being able to invent the ideal place.

4.    What would you like readers to take out of reading your books?

Of course the first thing is for them to be entertained. I love it when readers tell me they enjoyed visiting Thornton Springs and didn't want to leave. The underlying hope of course is that readers will be inspired by the lessons learned by the characters.

5.    A fun question to end. If you were to recommend somewhere in Montana for readers to visit where would it be?

I’m going to go out on a limb and say that you haven’t visited Montana until you’ve been to the Sweet Palace in Philipsburg. It’s an old fashioned candy store that’s bound to make anybody happy.

Shelia Macintosh is an LA restaurant designer, heading to Thornton Springs, Montana, to help her best friend, Courtney, prepare for the arrival of her baby. She’s looking forward to a restful two weeks, but things don’t go according to plan when Courtney’s cute older brother turns up … the one Shelia met at Courtney’s wedding last year.

Computer programmer Ben Jacobs had been immediately attracted to Shelia when he met her last year, but then she ignored him and he couldn’t work out why. Now they’re both back at Courtney’s ranch, Shelia’s giving him the cold shoulder, he still doesn’t know why and he’s too shy to ask.

I found Rocky Mountain Romance a frustrating read, because the central plot point was a simple misunderstanding that two sensible adults could have cleared up with a five-minute conversation (actually, they did clear it up with a five-minute conversation, but it came far too late for my liking). I understand that Shelia felt betrayed and didn’t want to talk about it, and that Ben was shy and didn’t know how to talk about it … but good communication is essential, not just for marriage, but for life.

Apart from that annoyance, I enjoyed Rocky Mountain Romance. The characters (especially the minor characters) were likeable, the setting was exotic (hey, I live by the sea. Mountains and cowboys are exotic), and the book was easy to read, with some lovely one-liners, like this one from Ben:

But it wasn’t as if women had a task bar that he could just click for reliable shortcuts.

Overall, an enjoyable if frustrating light read. Rocky Mountain Romance is the third book in the Montana Hearts series, but can easily be read as a standalone novel.

Thanks to ARCBA and the author for providing a free book for review. You can find out more about Lesley Ann McDaniel at her website.
Posted by Iola at 09:00