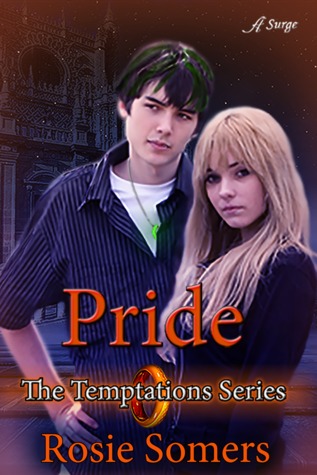 Seventeen-year-old Gabriella Pierce is used to taking care of herself, but she’s about to become responsible for a whole lot more. When she gets a visit from three men claiming to be defenders of fantastical rings imbued with the powers of THE CARDINAL SINS, her life is changed irrevocably.

Gabby is the steward of PRIDE.

To make matters worse, she’s falling hard for fellow steward, Grant Barnett, and he hates her guts. Now Gabby has to learn to protect Pride without letting her feelings for Grant get in the way.

Gabriella Pierce thought life was tough trying to evade a lecherous foster father, but things are about to get worse: she’s the female steward of Pride, one of the seven deadly sins, and the forces of evil are out to get her and the other stewards. Although they are all supposedly safe inside The Sanctuary, their secret underground home, certain events suggest they have a traitor in their midst …

Pride is aimed at the YA market, and is the first in a planned series (presumably one for each of the seven deadly sins). It incorporates elements of other well-known YA series such as Harry Potter and Divergent, (an orphan who is the ‘chosen one’ fighting the forces of evil). It has that fast pace and addictive quality which makes it hard to put down.

While elements of the plot are similar to those of other popular YA series, the seven sins idea is unique, and provides an underlying Christian theme to the battle between good and evil. Having said that, the plot isn’t overtly Christian, no more so than the Divergent series. There were some minor writing issues (e.g point of view shifts and run-on sentences), but nothing that detracted from the story—which indicates how compelling I found it.

The one possible fault was the characters: the fast pace of the plot and the (relatively) large number of characters meant there wasn’t a lot of time devoted to the development of individual characters. However, as I’ve mentioned, it is the first novel in the series, and I would expect that now we’ve been introduced to the concept of the sins and the stewards, future books will be able to show more in the way of character development.

Thanks to Aniah Press for providing a free ebook for review.

Rosie Somers is a YA author who lives in Florida, soaking up the year round sunshine. She can often be found in her favourite spot on her favourite beach, nose-deep in a good book. You can Rosie at her website, on Twitter, or on Facebook.
Posted by Iola at 09:00