Authors get stories from so many different places and experiences. It's always interesting to discover where the inspiration comes from. Today, we'll hear from debut author, Annette O'Hare. Her historical romance, Northern Light has already garnered some terrific reviews!


From the first sentence to the book’s stunning conclusion, Annette O’Hare’s brilliant first novel Northern Light captured my heart. O’Hare’s storytelling is flawless and her grasp of Texas history is spot on. This tenth generation Texan heartily approves! Do yourself a favor and savor this meeting of North and South on the Bolivar peninsula. I promise it will be the best book you’ll read in a very long time! —Kathleen Y'Barbo, best-selling author of over 40 titles

My Inspiration For Writing Northern Light

There’s a wonderful phrase known to authors that says, write what you know. This simple idiom by Twain, or was it Faulkner, no…I think it might have been Thurber, no it was definitely Twain who said it. Whoever it was knew what they were talking about and that’s why I wrote Northern Light. The setting for my debut novel is the lighthouse on the Bolivar Peninsula on the Texas coast; a place near and dear to my heart. A place I know very well.

When I was a child growing up in Houston, Texas in the 1970’s, my family visited Bolivar every summer for fishing, swimming, and shell hunting. My father would drive our family of five to Galveston, and then onto a short ferry ride connecting Galveston Island with the Bolivar Peninsula.

The ferry ride was a favorite part of the vacation. We made playful bets concerning which ferry we would ride. Would it be the Cone Johnson, the E.H. Thornton Jr., the R.S. Sterling, or the Gibb Gilchrist? We knew each boat by name. My two older brothers and I would save back French fries and pinches of bread from our fast food meals. After the boat was loaded and the captain gave the safety speech, we would bolt for the back of the boat to feed the seagulls and dolphins. 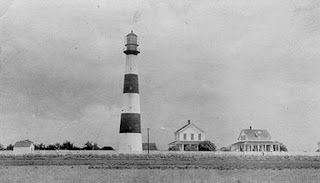 I always knew the exact place the ferry would dock at the peninsula because Daddy told me to look for the landmark. It was hard to find at first, but the closer the ferry came to Bolivar, the bigger it became. By the time the boat landed, the Bolivar Point Lighthouse was as big as a skyscraper in this little girl’s eyes.


Once off the boat we drove past the iron lighthouse. Her light extinguished, she no longer lit the way for ships coming in or going out of Galveston Bay. Daddy always pointed out the two, abandoned keeper’s houses beside the lighthouse. He showed how one of the house’s nameplates read Boyt and the other, Maxwell. I didn’t understand the significance then, but later I realized the connection. Daddy’s aunt, my great aunt, was married to a Boyt, and she and her sister, my grandmother, were born with the surname Maxwell.

You’re probably wondering if my daddy’s family were the lighthouse keepers. No, the truth is that Mr. Boyt, my great-uncle, bought the lighthouse and property at an auction and it has been owned by that family ever since.

The original Bolivar Point Lighthouse dates back prior to the Civil War. In fact, it was during that war that the Confederates completely dismantled the lighthouse. Some accounts say it was so the Union wouldn’t use the light to their advantage. Others say the Confederate army used the iron for weapons and artillery. Nevertheless, the lighthouse was rebuilt shortly after the war. The great conical tower has seen over 150 years of United States history and it still stands tall on the Bolivar Peninsula to this day. 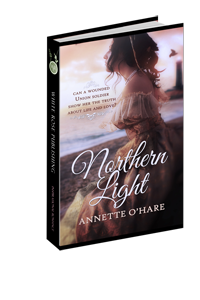 Civil War has robbed Margaret Logan of all she holds dear, including her beloved New Orleans home and her fiancé. When her family moves to the desolate Bolivar Peninsula to manage a lighthouse that is no longer there, all her hopes for a normal future are dashed. Her world is rocked once again when a wounded Yankee soldier washes ashore needing her help. Despite her contempt for the North, Margaret falls in love with Thomas Murphy. As their love blooms, Margaret’s sister is overcome with neurosis, and her mind slowly slips away. Bitterness, psychosis and depression yield a decision fueled by contempt. Will one fatal choice cause Margaret to lose the man she loves and condemn Thomas to death?


Annette O'Hare has one free ebook to give away today. To be in to win, leave a comment and tell us why you'd like to read Northern Light!