Review: For the Record by Regina Jennings

Should have Read the Earlier Books First ...

It could be just me, but I didn’t find this as compelling as I’d hoped. There was nothing wrong with it in terms of the writing, the plot, or the characters. It just didn’t have the zing I’d hoped for and I found the beginning somewhat awkward.

I think part of the problem might be that it felt like I was supposed to know some of the characters and their histories, and I didn’t. (I later found this is the third book in a series, and I haven't read either of the earlier books, A Most Inconvenient Marriage, and At Love's Bidding). Anyway, that gave me the feeling I’d been dropped in the middle of a social function where everyone else knew each other and I was left trying to infer relationships from what wasn’t being said.

And that’s exactly how Deputy Puckett feels when he arrives in Pine Gap to sort out the problems with the Bald Knobbers who have taken it upon themselves to be the law. It seems the people of Pine Gap want him about as much as he wants to be there – not that either he or the town of Pine Gap have any choice.

Meanwhile, Betsy Huckabee wants to succeed as a writer so she can be financially independent and not have to live with her uncle and his growing family. Her attempts at writing real news stories haven’t paid off in the city paper she’s submitted to, but the arrival of the handsome new deputy gives her a new inspiration … a fiction serial in the women’s section of the paper.

I did enjoy the story once it got going, and there were some excellent lines: 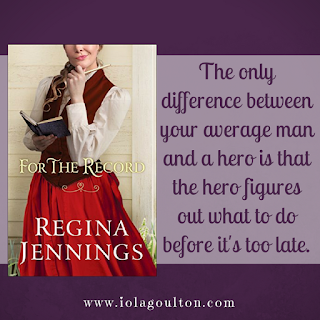 Overall, a solid historical romance novel, but probably more enjoyable if you've read the first two books in the series.

Thanks to Bethany House and NetGalley for providing a free ebook for review. Click here to find out more about Regina Jennings at her website, and can read the introduction to On the Record below: