The first book in this series, No One’s Bride, was one of the best books I read in 2016, so author Nerys Leigh had a keen volunteer when she was looking for reviewers for A Hope Unseen, the second novel in her Escape to the West series … but she’d also given herself a hard act to follow.

But she managed it.

Sara Worthing wants a marriage where she is loved for herself, not for her dowry. She becomes engaged to Daniel Raine, a man she has met only through his letters but who she is confident doesn’t want her for her money. When she meets she is pleased to find he’s as attractive in person as he was in his letters. And he seems just as attracted to her.

But, at the risk of using a cliché, the course of true love never did run smooth and it’s practically a rule of romance novels that trouble must come. As it does. And while I’m not going to spoil the story by telling you what happens, I will say it was great to see both characters turn to and rely on God in their difficulties.

Despite the romance, I think my favourite character was Will, Daniel’s brother who lives on the farm with Daniel and Sara. He is a loveable reprobate who provides a lot of the comic relief in the drama with lines like this: 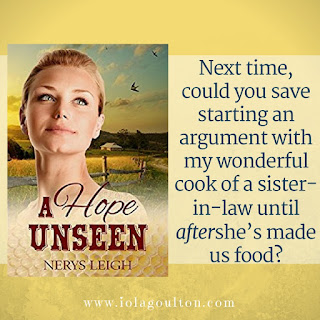 The unusual thing about this series is that the books aren’t sequential – A Hope Unseen takes place on the exact same timeline as No One’s Bride. This does provide a few moments of confusion when it references No One’s Bride—while I thought it was excellent, I don’t remember every plot detail and I’ve read dozens of books since then. On the plus side, this concurrent setting means it doesn’t matter what order you read the books in.