Today I'd like to welcome Elizabeth Musser to Iola's Christian Reads. Elizabeth is an American missionary living near Lyon, France, and has just released her latest novel. The Long Highway Home. 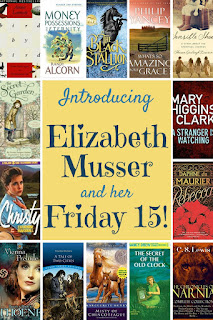 A Little Princess and The Secret Garden captured my heart as a child. Loved, loved, loved Sara Crewe and when I read her riches to rags to riches tale, I longed to write a story like that.

I grew up around horses and when I wasn’t riding one or cleaning out a stall or tossing hay to my ponies, I was curled up with Farley’s Black Stallion series or Henry’s Born to Trot, Misty of Chincoteague and the sequels. I started writing horse stories because of these authors, and I would also illustrate them (inspired by the wonderful drawings by Wesley Dennis in Henry’s books.) Despite my obvious skill, ahem, I have never been asked to include my illustrations in my novels!

I now know this was a pseudonym for various authors who penned the Nancy Drew series, but I didn’t know it as a child and I devoured these stories—I think I had the whole collection at the time (in the late 1960s), maybe 50 or 60. Nancy gave me my first taste of mystery tales—(and taught me a new word: sleuth)—and I determined I would write some myself.

“Last night I dreamt I went to Manderley again.” That first line! The mystery, the romance, the intrigue, I fell into those wonderful and exotic lands of du Maurier’s prose as a teen and wanted to stay there forever. This novel and a few others were also a big inspiration for me.

I wept when I read A Tale of Two Cities. The themes of sacrifice and redemption broke my heart and inspired me to try, try, try, in my small way, to show faith and hope in my stories. And I love Dickens’ ‘cast of thousands’ in his novels and the way he leads us down many paths with delightful twists and turns that ultimately come together.

As a young woman, Marshall’s non-fiction, A Man Called Peter, To Live Again, Beyond Ourselves and The Helper profoundly influenced my spiritual life. Her novels Christy and Julie showed me a contemporary author (of the 20th century) doing what the great writers of centuries past had done—incorporate themes of faith into a wonderful story.

The Chronicles of Narnia, The Screwtape Letters, Mere Christianity and on and on. His words helped me understand God’s Word better and encouraged me to grow up in Christ.

Her Zion Covenant and Zion Chronicles series provided endless hours of entertainment as well as history lessons for me and many other missionaries in Europe. We’d pass the books around til they were completely worn out. I admired the way she included great historical detail and non-stop action in her stories of faith. I learned so much about recent history from her novels, and they added to my desire to write recent historical fiction (20th century) that I call ‘entertainment with a soul’. She paved the way for the Christian fiction movement of the late 1980s on up through the present.

When I needed a complete escape from life, I’d read her suspense novels in French (helped my language learning too) and off I went.

His books Money, Possessions and Eternity and Heaven had me nodding in agreement, reflecting, reconsidering and challenging me to think more broadly.

I so admire the way Yancey tackles the most difficult questions with honesty and humility. He tells fascinating stories of real people that force me think outside a too-narrow box of faith.

When I first read Traveling Mercies as a young missionary wife and mom, I was deeply offended, highly entertained and ultimately so thankful for her very ‘out of the box’ unique voice. Her Bird by Bird has been a great encouragement as I write.

A few years ago, I began spiritual direction with a fellow missionary who lived in France. She gave me Sharon’s novel Sensible Shoes as the first book to read. A novel! And what a novel! The Sensible Shoes series (Sensible Shoes, Two Steps Forward, Barefoot) has been a life-changing adventure for me as Sharon brilliantly tells the story of spiritual transformation in the lives of four ordinary women. I find myself in each of the women and the spiritual exercises they work through have been extremely helpful for me, too, in this season of my life. I recommend the books widely and use the Companion Guides in my Member Care role with fellow missionaries.

Her prose is breathtaking and her stories real, the characterization deep, the faith element subtle and true. One of our finest CBA authors today.

ELIZABETH MUSSER writes ‘entertainment with a soul’ from her writing chalet—tool shed—outside Lyon, France. Elizabeth’s highly acclaimed, best-selling novel, The Swan House, was named one of Amazon’s Top Christian Books of the Year and one of Georgia’s Top Ten Novels of the Past 100 Years. All of Elizabeth’s novels have been translated into multiple languages. The Long Highway Home has been a bestseller in Europe.

For over twenty-five years, Elizabeth and her husband, Paul, have been involved in missions’ work in Europe with International Teams. The Mussers have two sons, a daughter-in-law and three grandchildren who all live way too far away in America. Find more about Elizabeth’s novels at www.elizabethmusser.com and on Facebook, Twitter, and her new blog. See photos from scenes in The Long Highway Home on Pinterest.

About The Long Highway Home

Sometimes going home means leaving everything you have ever known.

When the doctor pronounces ‘incurable cancer’ and gives Bobbie Blake one year to live, she agrees to accompany her niece, Tracie, on a trip back to Austria, back to The Oasis, a ministry center for refugees that Bobbie helped start twenty years earlier. Back to where there are so many memories of love and loss…

Bobbie and Tracie are moved by the plight of the refugees and in particular, the story of the Iranian Hamid, whose young daughter was caught with a New Testament in her possession in Iran, causing Hamid to flee along The Refugee Highway and putting the whole family in danger. Can a network of helpers bring the family to safety in time? And at what cost?

Filled with action, danger, heartache and romance, The Long Highway Home is a hymn to freedom in life’s darkest moments.