Novella Sequel to Once Upon a Prince 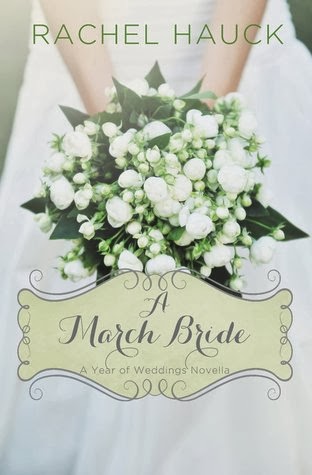 This is the fourth book in the A Year of Weddings series of novellas from a range of contemporary authors such as Denise Hunter, Rachel Hauck and Deborah Raney (not surprisingly, the plan is for a series of twelve books). Each novel appears to be a standalone story, although the two I’ve read so far both link to other books by the author.

A March Bride starts with Susanna and Nathaniel on the final countdown to their wedding. Susanna has spent the last ten months living in the kingdom of Brighton (eyes roll at the coincidence that the fictional kingdom is named for a town on the south coast of England), and everything is going to plan … except that Nathaniel has been somewhat distant. Is he having second thoughts? No, but the Senate have just announced a law change that might force Susanna to reconsider …

I found A March Bride a little harder to get in to than the first novella I read in the series, probably because it’s the sequel to Once Upon a Prince. While it works as a standalone story, the beginning is awkwardly bogged down with positioning Nathaniel as a British-without-being-British King (with a whole host of posh friends), and Susanna as the redneck from Georgia (and it did irritate me that she kept calling herself a redneck). It also appeared as though it was going to turn into a heavy-handed allegory of our citizenship being in heaven, but it didn’t (thankfully).

While I did enjoy this, I think it would have been more enjoyable if I’d read Once Upon a Prince first—and if the beginning of A March Bride hadn’t been quite so awkward. Once I got past that, the story improved and was able to focus on the central question: is Susanna prepared to give up her American citizenship, the one thing she still felt was hers, in order to marry Nathaniel? As she works through this decision, Hauck makes some interesting points about love, relationships, and our place as the Bride of Christ.