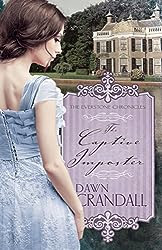 After the murder of her brother, heiress Estella Everstone goes incognito as Elle Stoneburner, paid companion to an elderly widow. But she doesn’t anticipate the job taking her to Everston, her favourite of her family’s hotels, where she meets Mr Dexter Blakeley, the hotel manager … and Jay Crawford, her ex-fiance.

The whole book is told in first person, by Elle/Estella. She’s an interesting character: people treat her differently as Elle Stoneburner, and she finds their attitudes quite different. It gives her the opportunity to find out who she really is, apart from the much-younger Everstone sister, the heiress. The first person gives it a gothic romance field, a little like Victoria Holt (for those old enough to remember her!).

This is especially the case with Mr Blakeley and his mother, both of whom seems to have a low opinion of society women. Elle/Estella is attracted to Mr Blakely, and he seems to be attracted to Elle, but will he have the same feelings for Estella, given she represents so much he appears to despise?

I’ve read all three books, and they all have solid plots with excellent characters, feisty women with faith and attitude. The books are well-written, and I especially like the way they each include a strong Christian thread without being preachy. Having said that, I think The Captive Imposter is my favourite of the three books, because the plot is something a little different, and because the characters are so good--both well-imagined and well-portrayed. Recommended for fans of historical romance.