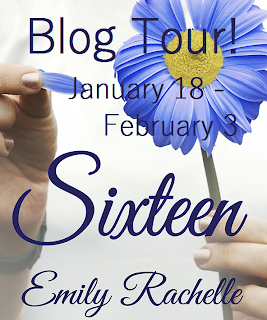 Today I'd like to introduce you to Emily Rachelle, author of Sixteen, as a guest. Born in Panama, Emily Rachelle has traveled throughout the country and the world with her Air Force family. Currently, she lives with her parents and three brothers in middle Georgia.

While Emily enjoyed reading as far back as she remembers, writing didn't come to her until she learned the forms of poetry and the basics of story in fourth grade. Since then, she's written scripts for homeschool dramas, poems for birthday presents, and stories for friends and family to enjoy. Sixteen is her debut into the professional world of words. You can find Emily at her blog, Emily Rachelle Writes, http://emilyrachellewrites.blogspot.com.

1.The main character, Nikki, and her best friend, Christy, were both based in part off myself and my best friend, Mikaela.

2.Speaking of Mikaela, Nikki and Claire share a birthday with her! March 29 is both characters’ birthday, and I chose it because it was Mikaela’s.

3.Sixteen was originally set in modern times, with Nicole and Claire’s scenes set in the future. I even made up new car brands and restaurants for this near-future of mine. Ultimately, though, I decided my future sounded really lame, and then discovered researching the nineties was a lot easier and more fun than I’d thought.

4.Christy has gone from blonde, to brunette, back to blonde, until I finally settled on auburn.

5.Matt and Claire are the only characters I’ve written so far with green eyes. I’ve since learned how rare green eyes are in real life, and how cliched they’ve become in fiction.

6.Sixteen is the only book without a minority-race character. Honestly, the book’s a bit whitewashed, but that fits the small-town setting a lot better than the larger settings of my other books.

7.Christy was named after two of my favorite literary characters - Robin Jones Gunn’s modern teen Christy Miller and Catherine Marshall’s 1900s missionary Christy. Both were Christians like my Christy. After writing the character, I discovered two more similarities: all three Christys have a brother, and all three have gentle spirits (quite a contrast to Nikki!)

8.I still have the first draft of Sixteen saved on my computer.

9.After many temporary titles, this story was called Sweet Seventeenth. That was going to be its published title, but it felt just a bit off. Not until I decided on Sixteen did the title feel like the perfect fit.

10.During the opening scene, we meet a character with very few parts - Claire Monroe. This girl is a college-bound rebel, with short purple hair, a tank top, and very holey jeans. But in the first draft, Claire was introduced as a closet hopeless romantic with brown hair and a t-shirt -- not at all her style, I realized later, and way too much like her mom.

11.If I could change any one thing about this story, I would give a character more “screen time.” Whether that character would be Claire Monroe, Matt’s sister Abigail, or Matt himself, I’ve never decided.

12.My first rejection letter was from an agent whom I queried concerning Sixteen. I don’t plan to seek representation or traditional publishing again at this point - I’ve discovered that the control and freedom (yes, even the smaller fanbase) of indie publishing suits me much better.

14.I chose January 18 for Sixteen’s release date before I finished editing the manuscript. At that time, the pro-life message was still the book’s theme, and January 18 is a national pro-life holiday. Since finishing edits, the theme of the book has switched to focus solely on mother-daughter relationships, but I kept that release date as a nod to the original story.

15.If Matt were an animal, he’d be a fish. A colorful fish, but still a fish. His laidback manner balances Nikki’s wild nature.

16.Sixteen was inspired in part by a lack of Mother’s Day gift ideas.

You can connect with Emily a number of ways:

Sixteen is available to buy at:

... and will be available in paperback from Amazon after 29 March.

Emily is offering a Kindle giftcard and ebook as part of a giveaway on her blog, so make sure you enter at http://emilyrachellewrites.blogspot.co.nz/2014/01/sixteen-blog-tour-kick-off-giveaway.html. And visit more of the 16 stops on the Sixteen tour!

Teenager Claire Monroe is anxious to graduate, leave home and be free of what she sees as restrictive parents. Her mom, Nicole, doesn’t want Claire making the same mistakes she made …

It’s 1995, and Nikki Johnson is sixteen, working part-time as a ballet instructor. She meets Mark, the 23-year-old uncle of one of her pupils, and a friendship develops that gradually changes into something more …

The story moves back and forth between the present (2014, with Nicole telling her story to her daughter) and the past (1995, Nikki’s story). As I was reading, I was thinking, “This isn’t going to end well.” I’m not going to tell you how it did end (obviously), but it was a satisfying combination of expected and unpredictable.

Sixteen is a very good fiction debut. The writing is strong, the characters realistic and the situation all too believable. What is especially good is the way the author has got into the mind of Nicole, showing that teenagers haven’t changed (and their parents really do understand them).

Overall, this was a well-written story, with the main issue that it was a bit on the short side. I would have liked to have seen more of Mark, to understand his thought processes, and I thought there could have been more emphasis on Nikki’s motivation and reactions, especially with the dress scene (I don’t want to say more, for fear I’ll give away the story, but you’ll know what I mean if you read it).

Sixteen is written by a teenager, and while it’s aimed at teens, older readers will still enjoy it. This is an excellent first novel, and I’ll look forward to seeing what Emily Rachelle can produce next.