Friday Fifteen: Fifteen books which have influenced your life or your writing. Today, a warm welcome to Father Nicolas A Marziani, Jr, an author from St Augustine, Florida.

Some of these titles are “dated but enduring” in age and character, and not all are specifically “Christian”, although they bear upon the art and science of writing a Christian novel, or at least touch upon themes that speak to me as a newbie writer of Christian fiction.

I leave it to the reader to decide if and how these works might benefit their own writing of the same.

I am a sixty-something male cleric, and something of an academic, so my job of limiting titles to fifteen has been difficult for reasons likely different than others with the same task. Still, I plunge ahead with the hope that curiosity will prompt further investigation of at least a few of what follows.

1, 2, and 3. Morris West and Colleen McCullough


First, the works of Aussies that really captured my imagination. Morris West no longer seems to be in vogue these days, but two of his many books were formative for me – The Shoes of the Fisherman (1963) and The Clowns of God (1981). West never lived to see the dawn of the 21st century, and I often wish he was still around to hold forth a vision of a church that can only be effective to the extent that its less than worldly-wise, scheming members seek to serve rather than be served. The ultimate in “holy foolery.”

Of a similar streak but clearly a romantic, recently deceased Colleen McCullough’s classic (and highly regarded television mini-series), The Thorn Birds, presents us with an ambitious cleric who in the end is redeemed only by the love of a woman who endures much in order to do so. Meggie may also be something of a “schemer”, but her deception has salvific value for Ralph. The enduring spiritual, as well as sometime physical, bond they share makes this a unique and compelling read.

More redemption through relationships of desire. W. Somerset Maugham’s classic, Of Human Bondage, has us considering how depth experiences between men and women, however tortured, can potentially ignite higher instincts.

Then there is George MacDonald’s “mythopoeic” (C.S. Lewis’s words) Lilith (subtitled “A Romance”), which requires us to wrestle with ageless themes of human sexuality in the context of the overall human call to full personhood.

6 and 7. Dostoevsky and Steve Berry


The Russian streak in me was stoked by the Dostoevsky tome, The Brothers Karamazov, which, while a daunting and even intimidating read, also utilizes the backdrop of desire to highlight that which is both noble and sordid in the human enterprise.

In a different vein, philosophically and romantically speaking, but still quite focused on all things Russian and certainly more accessible to the modern reader, Steve Berry’s second novel, The Romanov Prophecy, thrusts us into a world of czars and Faberge eggs amidst bullets flying in this swirling fast-paced international thriller. I’m not a thriller fan, actually, but Berry is a local author here in St. Augustine who held a one-day workshop a few years ago that I found very helpful as a nascent novelist.

Considering the theme of human sexuality in a more academic fashion and grounding it more specifically in spiritual realities, feminist theologian Sarah Coakley’s God, Sexuality, and the Self: An Essay ‘On the Trinity’ presents a vision of how and why human desire and deeply contemplative prayer share a profound common connection.

This notion is very important to me, personally and as the author of my new book. Is romantic love merely an evolutionary ploy, a cosmically inconsequential exercise in tingly experiences, or is it reflective of a fundamental aspect of Divinity itself? Being necessarily a theologian as well as a newbie writer of a book containing strong romantic themes, I had to make sure my story was anchored in solid spiritual soil.

Speaking of things spiritual, as a Western, Latin-Rite priest I needed a better understanding of how Holy Orthodoxy could work in my book. Timothy Ware’s classic, The Orthodox Church, filled part of the gap in my knowledge base on the central subject of Eastern Christianity.

My male co-protagonist is something of a strange, exotic bird, so I found encouragement to explore the theme of a highly gifted, even eccentric, young character in Sylvia Nasar’s A Beautiful Mind (1998), and Chaim Potok’s The Chosen (1967), both of which eventually made it to the cinemas.


There are those who argue that ultra-talented characters are somehow less than “real” and difficult to relate to by the average reader, but unless the character in question is a “Superman” or “Superwoman”, the argument fails, in my opinion. These books show us extraordinary people who nevertheless have deep wounds, almost as a quid pro quo for their giftedness.

And then there’s a new book, which I will admit I have not actually read yet but will do so shortly, Dean Koontz’s Saint Odd (sounded too much like part of the title of my own new book to pass up!). Dreams and visions and destiny are the promised mix of this concluding work to Koontz’s Odd Thomas series, again laying to rest the notion that the public doesn’t want to read about characters whose unusual powers and contexts make them somehow less than connected and therefore attractive to the “real lives” of rank and file potential readers.

I have always found just about everything written by Gilbert Keith Chesterton to be of inestimable value. This prolific storyteller, philosopher and social commentator of the early twentieth century still insightfully speaks to me today of divine foolishness and human pretensions to a wisdom that is ever less compelling than that “foolishness” that comes from God. In Defense of Sanity, in particular, is a wonderful collection of Chesterton’s essays that present a Christian worldview to a culture and society in serious need of intellectual and moral repair.

A nifty little title that really helped me get down to the serious business of finishing my book when distraction constantly dogged my heels is Steven Pressfield’s The War of Art (2002). We meet the creativity-killing devil incarnate, Resistance, and discover to our horror – and potential remedy – that it lives within us all, but is ultimately subject to our diligent warfare against it. It truly kicked some serious writer’s block butt in this old guy, and would strongly recommend it as serious medicine to anyone with a story within screaming to get out of prison!

And finally, as you might expect from a preacher, The Holy Bible. Not only has this ultimate, best-selling classic provided uber-inspiration and insight for centuries and even millennia of creative endeavor, it has often even provided the very words of the lexicon that informs our writing. Shining throughout is the message that “holy foolery” is our only real hope for salvation. It surely drove everything in me that produced my first attempt at serious fiction.


And so there they are. A rather unusual list of candidates for reader inspection, I know, but I guess as a married Catholic priest I’m not exactly your typical Christian novelist handling strong romantic sub-themes (and I have no illusions I’ll ever be an Andrew Greeley).

Many thanks to Iola Goulton for the opportunity to share from my little treasure trove of inspiration. God bless!

About Nicholas A. Marziani, Jr. 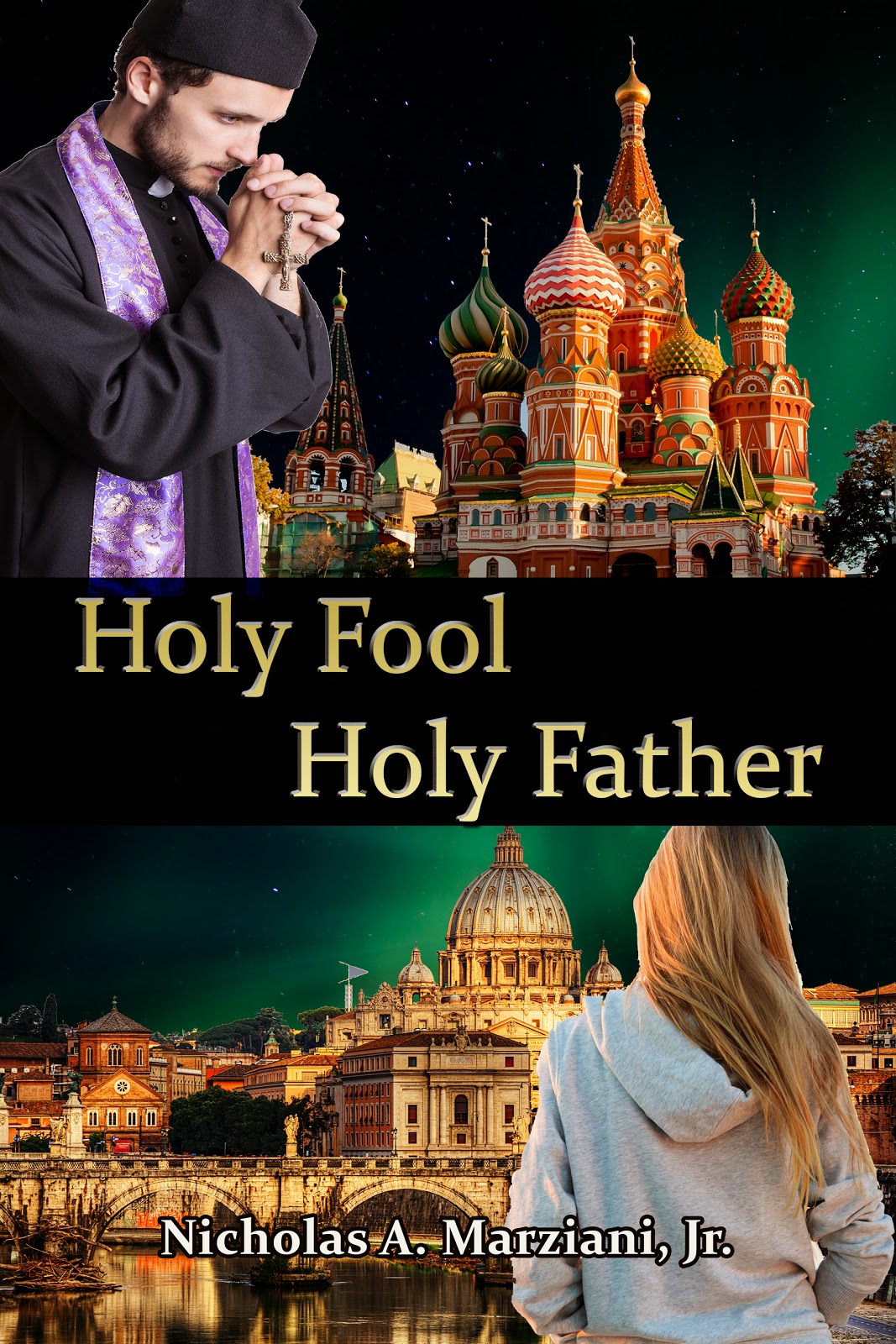 Nicholas A. Marziani, Jr. is a married Roman Catholic priest and pastor, and holds the Doctor of Ministry degree from Trinity School of Ministry, Ambridge, PA, and undergraduate and graduate degrees in engineering technology and marine studies, respectively. Besides ministerial activity with the Episcopal and Catholic churches he has held positions in higher education administration and as a secondary and college level instructor in science and comparative religion, respectively. He and his wife Joanne have three adult children and six grandchildren, and enjoy travel and study both domestic and abroad.

He has recently published his first novel, Holy Fool, Holy Father. Written as a present day saga, Holy Fool, Holy Father starts with the premise that the Roman Curia may be the only hope for the world to survive after a cataclysmic event. But that success hinges on the participation of the Eastern Orthodox churches and the Holy Women of the world, all led by a modern-day Holy Fool and the woman who gave up all to serve at his side.

Based on what we know, what we’ve been taught to believe, is there really any hope?

Experience a vision of a future in which things that are seemingly at odds are reconciled.

Holy Fool, Holy Father also includes many themes and scientific ideas gained through Marziani’s eclectic, well-rounded background in both religion and engineering. His goal is to lead the conversation and merge the spiritual and scientific through literature.