I'd like to introduce Erin Burnett to Friday Fifteen. Erin is a teen from Northern Ireland who has recently released her first fantasy novel for children and young teens, Liza's Avenger.

Hikari once lived an idyllic life in the far-reaches of the Maysea Continent, but when her sister Liza is killed by the mysterious Kellua race everything changes. She is plunged into a perilous journey filled with epic battles, life or death situations and new friends that share her determination to stop the Kelluas. However, will destroying her enemies really bring her peace?

Hikari must decide what is best: revenge or reconciliation.


It was difficult to narrow my list of authors that have inspired me to just fifteen! They are listed in the order I read them, childhood up to present day. Thank you, Iola for the opportunity.

Just about every Christian fantasy author names the Northern Irish born Lewis as an inspiration, which is proof of how impactful his books are even after sixty-five years. The Chronicles of Narnia are a triumph, as are his other books such as Mere Christianity.

When I was younger my main issue with Christian middle grade books, especially those from the big publishing houses, was that there was very little Christianity in them. This wasn’t the case with Tewkesbury’s Topz series. It was relevant, meaningful and entertaining – what all children’s Christian fiction should be!

Another example of a great middle grade author, even if her books are not explicitly Christian. Elliot writes historical fiction very well using turbulent periods such as the world wars and Vietnam.

Morpurgo was the UK Children's Laureate when I started primary school. I believe is one of the best children’s authors out there and his books were great to study in the classroom.

Funke is a master of writing fantasy. Her books resound with all ages and the worlds she creates are so detailed and rich. They are the sort of books you can read time and time again without them losing their charm. My personal favourite is Dragon Rider.

I’m straying from the brief slightly, because Suzumoto writes visual novels as opposed to physical ones. Regardless, his stories never fail to be extremely moving and have influenced me greatly. His visual novel Planetarian use Christian themes and hymns as part of the story.

The most impressive thing about Wells is how he wrote such futuristic science fiction in the 1800s. His political writings are also interesting and he helped promote equal rights for all races during the time of the Second Boer War.

The first time I read Christian science fiction was Downing’s Talon’s Test and the Shield of Faith. It took all the classic elements of space opera – adventures through space, futuristic worlds and chivalric romance – and gave them a Biblical twist.

Zebedee is a fellow writer from Northern Ireland. Her space opera Abendau’s Heir has excellent character development that is established early and continued throughout. The overall plot and world building was very good. She always supports local writers.

The reason I like Mitchell’s novels so much is how he entwines several seemingly unrelated plotlines into one, the most obvious example of which is Cloud Atlas. I enjoy novels that require some figuring out. He has also written books set in Tokyo, which is a city I love.

Moving on to non-fiction, Strobel’s book The Case for Christ was instrumental in my coming to Christ. It details his own journey from atheism to Christianity. He logically sets forth the historical evidence for the events of the New Testament and refutes many so-called contradictions within the Bible.

I genuinely can’t remember how I first came across reformed theology, but I quickly wanted to study further into it. No-one has ever produced a more extensive, well thought-out summary of it than in Calvin’s Institutes. Of course, we must remember no man is infallible.

Dinnen writes very practical guides about the Christian life and service, weighing up the pros and cons of different areas of ministry and encouraging the reader to seek out their own calling.

I had never heard of Nagai until I visited Nagasaki, Japan, and purchased his book Leaving My Beloved Children Behind on a whim. It was written as he died from radiation-induced cancer during the aftermath of the atomic bombing which claimed his wife. There isn’t a hint of self-pity or anger in his writings even as he endures such suffering. I was extremely glad to hear that this year his story has been adapted into a film. Hopefully more will be able to learn about his life.

Yohannan is founder of Gospel for Asia and his book Revolutions in World Missions is available for free, including international shipping. It tells of the encouraging missionary developments in Asia. A strong desire to see the lost saved is evident in every chapter. 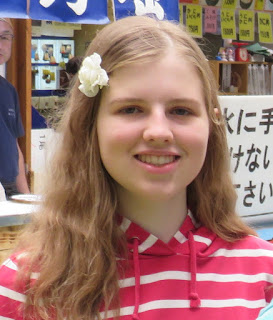 Having enjoyed writing from a young age Erin Burnett felt compelled to write for Christ, and wrote the first semi-readable draft of Liza's Avenger on a school computer when she was thirteen. Since then she has joined Belfast Writers' Group and strives to improve her writing. She firmly believes that with God, nothing is impossible.

In addition to writing Erin enjoys cycling and travelling. Of the 58 countries she has visited, her favourite is Japan. She is currently a sixth form student and lives with her wonderfully supportive family in Belfast, Northern Ireland. She aspires to study theology at university level.