Today I'd like to welcome Katherine Blessan to Iola's Christian Reads, to share the fifteen authors who have most influenced her life and writing.

Lydia's quiet expat life in Cambodia is dramatically turned upside down by the sudden arrival of Song, a young & vulnerable Vietnamese girl, and the flattering romantic attentions of a handsome, dashing local man. Just as she settles into this new-found happiness, everything is shattered as Song is kidnapped and sold into the child sex trade.

Broken, Lydia returns to the UK, confirmed in her doubts about 'God', only to find the most unexpected guest on her doorstep one night many years later with the most incredible story to tell of hope lost and innocence restored.

I began this list, I realised that there are so many more authors that have influenced my life, my thought, my imagination and my writing than I had thought. When people ask, “who are your favourite authors?” I usually narrow the list down to three or four from the list, but that is reductive as there are actually hundreds! They haven’t all influenced me in the same way, however, and these fifteen are a list of some of the writers who have stirred me the most. I hope you enjoy my eclectic list. The order is loosely chronological according to the age at which each was first read.

Like many, the Narnia Chronicles stirred within me a beating heart for stories and an awakening to the joy and adventure of a life of faith. I re-read them many times as a child and wrote about them for an MA dissertation as well as directing a dramatization of The Voyage of the Dawn Treader with a group of students I taught in Cambodia.

Wilder’s memoirs of her life lived as a pioneer in the American West captivated me as a child and were part of my inspiration to study American Studies as a Bachelor degree.

What an incredible wealth of imagination and thought went into the writing of The Lord of the Rings and The Hobbit. A whole world and history is created in such a way that we care deeply about Bilbo and Frodo and Aragorn and the rest and our hearts beat in fear against the orcs and Saruman. The fact that it is the little humble folk who are central to the war against evil is a beautiful mirror of the way in which God uses the humble.

Jane Eyre stirred in me a depth of understanding into the human heart, all wrapped up in an engaging story of courage, love and strength. No-one can forget the scenes in this story of poor Jane at Lowood, of Jane’s heart-breaking flee from her beloved Mr Rochester and her return to him when he is scarred and blinded.

Eliot was one of the few poets that I studied for A-level English Literature whose writing I fell in love with. Sharp, insightful and casting both a humorous and dark light on the foibles of human ways, his journey into the Christian faith is fascinating.

Jane Austen’s wit and poignant attention to matters of the human heart has in my opinion never been beaten by Pride and Prejudice, in which Elizabeth Bennett’s liveliness of spirit and honesty pitted against the enigmatic Mr Darcy brings a delight and depth to the novel, and we can laugh and sigh at the foolishness of characters such as Lydia and Mr Collins.

Birdsong is one of the most captivating and elegaic books about the First World War ever published.

Memoirs of a Geisha is a compelling, lyrical tale that gave me a fascination with the Far East and drew me into the heart of the story. One of the characters in Golden’s novel inspired me in the writing of one of my own minor characters in Lydia’s Song. See if you can identify who the two characters are!

The Tenant of Wildfell Hall is one of the best, most raw and compassionate Bronte stories, and a compelling insight into how easy it is to deceive oneself about someone’s character when judgement is driven by emotion. I recently wrote a short story inspired by the character of Arthur Markham.

Wild Swans is an incredible tour de force that sweeps its way through three generations of women oppressed by Chinese traditions and politics. This is history at its best told as ‘her-story’. I couldn’t put it down.

What’s so Amazing About Grace stayed with me for many years. I was stirred by Yancey’s stories of grace at work through the everyday and of the opposing curse of legalism.

I only ever read an abridged version of Hugo’s epic novel Les Miserables, but its story and characters gripped me and are a concrete example of the way in which God’s grace works in the lives of sinners.

A Thousand Splendid Suns is a beautifully written and painful story of the lives of oppressed women in Afghanistan and their journey to freedom.

Qureshi’s book Seeking Allah Finding Christ is a forthright biography of his search for God. He uncovered truth layer by layer, but as it meant so much to him to hold onto what he had always believed his journey was a long, drawn out one. I wept when I reached the end!

Gary Haughen's inspiring, compassionate and gripping book Terrify No More about young girls being rescued from a brothel in a village near Phnom Penh, Cambodia, provided much of the impetus and background for my own novel. 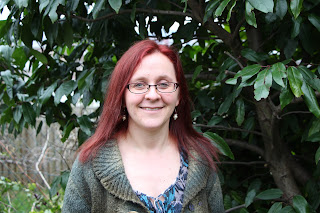 Katherine Blessan is the debut novelist of Lydia’s Song, a story that explores the horrors of child-sex trafficking through duel narrators. A proportion of all her royalties is helping anti-trafficking organization Hope for Justice.

Katherine lives in Sheffield, UK with her Indian husband and two young children and is currently working as an English tutor as well as concentrating more on writing than she’s ever done before. Katherine has always loved stories and writing but has only recently developed the skills to really be a writer.

Katherine has offered one ebook copy of Lydia's Song as a giveaway. Leave a comment and tell us which is your favourite author off Katherine's list to be in with a chance to win.
Posted by Iola at 09:00