A beautifully spun story about the power of second chances. ~ Amazon Reviewer
I loved The Bitterroot Bride! The part where she compares church
to riding a trot made me laugh out loud.  ~A. Chatman 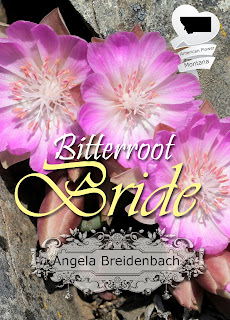 No one knows the real Emmalee Warren, just what they want from the infamous prostitute. Men are coming out of the woodwork to stake a claim on the miner's widow. They wanted her body before. Now they want her money. Hiring a lawyer, Richard Lewis, to save her from financial ruin might let her start over where no one knows Miss Ellie. Becoming an unknown is the only way to freedom…or is it? Can she leave her past and build a new future?

Ques: We heard there was something special that happened to you while writing your fourth book in the historical romance series, Montana Beginnings. What was special about the Bitterroot Bride heroine for you?
Angela: Writing Miss Emmie learning to read became an amazing experience. Though I’d learned to read at four, I didn’t understand how to connect and read people until well into my adulthood. So while Miss Emmie became proficient in reading, I became proficient in relationships. She’d eat up every book she could get her hands on and studied with intensity. I did the same thing, but about relational topics.

Ques: When did you realize the parallel character arc had so much in common with your real life?

Angela: About halfway through the first draft an epiphany happened. I stopped, took a day or so to really think about my personal experience, then began an intentional focus on writing the emotional parallel.

Ques: What do you hope Bitterroot Bride does for readers?

Angela: I hope this story is both entertaining and encouraging. I’d like readers to absorb the idea that like Miss Emmie and me, if you have the desire to learn something then you can. Age doesn’t matter.

Ques: Can you tell us the titles and a little about the Montana Beginnings series?

Angela: All four titles are set in Helena, MT from 1889 – 1895. It’s right when we became a state, but mining couldn’t support us forever. The Debutante Queen introduces us to Calista who steals an orphan off the street to protect her from a cruel master. Eleven Pipers Piping brings forward the newsies, newspaper boys and orphan train leftovers, into Mirielle’s classroom. Then in Taking the Plunge, Delphina takes us back to the iconic Broadwater Natatorium as a swim instructress. Then Emmalee enters the scene as we find out how Montana chose her state flower. Each of these lovely Victorian ladies finds her true love while carving out a meaningful life in Montana’s frontier.

Angela Breidenbach is a bestselling author and host of Grace Under Pressure Radio on iTunes. Angela is the Christian Author Network's president. And yes, she's half of the comedy duo, Muse and Writer, on social media.
Connect Here:
Website: http://www.AngelaBreidenbach.com
Twitter/Instagram/Pinterest: @AngBreidenbach
Facebook: http://www.facebook.com/AngelaBreidenbachInspirationalSpeakerAuthor
ITunes: https://itunes.apple.com/us/podcast/angela-breidenbach-grace-under/id1026177378?mt=2