Within the aftermath of an epidemic that has been contained through sacrifice rather than cure, a young woman discovers she has contracted the Disease.

She has three days to live.

Society has deemed her irredeemable and requires her to pass her last three days in quarantine; a sacrifice for its own preservation.

On this sad, but beautiful journey, they are faced with the questions;
Where does the light come from in their lives?
What happens when that light goes out?
What is there beyond life itself?

What initially captured my attention about Three Days was the voice. It’s told in first person, from two points of view: a husband and wife, both unnamed. The wife has the Disease, and while we don't know at first what the Disease is, we see it means she has ten minutes to leave her entire life behind and go into isolation. And the husband is left behind to cope with life alone.

While this provides a lot of intrigue at the beginning, the constant telling and unbelievably long paragraphs make parts of it a long slow read, especially the husband’s point of view. There were also a few speed bumps: misspelled words, typos, tense mixups, and stilted dialogue (which I suspect was a result of a lack of contractions and gave the novel a "foreign" feel, even though I later worked out it was set somewhere in England—where I lived for ten years, so not exactly foreign).

Yet some of the writing was brilliant: 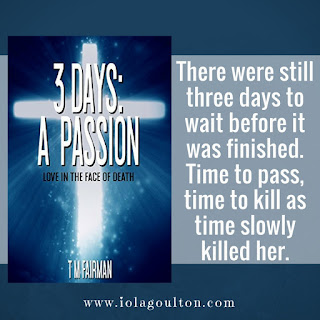 Isn’t that intriguing? And it was lines like that—and the overall intrigue of the story—which kept me reading.

Three Days is subtitled A Passion, which has clear links to Jesus and his Passion—the time between his crucifixion and resurrection. But I wouldn't call it Christian fiction. Yes, there were faith elements, but they were understated. It's more a study on dying and death, and one that was all the more poignant as I was reading it the day my father died.

Does Three Days answer the big questions posed in the book description? I don't think so. But I'm glad I had the opportunity to read it.