Proper English governess Eleanor Morgan flees to the colonies to escape the wrath of a brute of an employer. When the Charles Town family she’s to work for never arrives to collect her from the dock, she is forced to settle for the only reputable choice remaining to her—marriage to a man she’s never met. Trapper and tracker Samuel Heath is a hardened survivor used to getting his own way by brain or by brawn, and he’s determined to find a mother for his young daughter. But finding a wife proves to be impossible. No upstanding woman wants to marry a murderer.

It’s been a while since I’ve read a novel set in America’s Colonial era. It’s an interesting time, as Europe (and even the bigger American settlements) are relatively sophisticated, but out in the back country, Americans are still living in tents and hovels.

The novel begins in 1770, before the American War of Revolution and the Declaration of Independence, but it’s easy to see the hotbed of political activity the country will become.

There are social tensions, as the country is a mix of free immigrants (religious or economic) and those who have immigrated as indentured servants, those who were forced to immigrate as convicts, or the growing number of slaves. There are also the racial tensions—between American settlers and the local Indians, between the Indians and the English, and between the English and the American settlers who want more rights.

The Captive Heart touches on many of these issues without making them the central focus of the plot—which is good. The central focus always remains on Eleanor: on her understandable difficulties in adapting to the hard life of an American settler, on her feelings for Grace, her charge … and her feelings for Samuel Heath, her owner and her husband ... who I liked a lot, mostly because of lines like this: 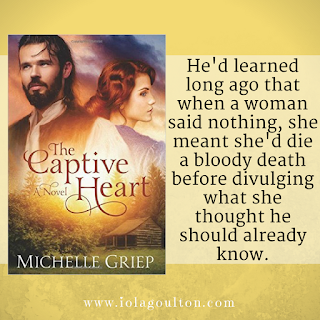 Samuel has secrets, a lot of secrets, and these are gradually revealed throughout the story. This keeps the plot moving, and gives us more and more reason to want to see Samuel and Eleanor together properly. The writing is excellent, with shades of early Deeanne Gist novels such as A Bride Most Begrudging (which remains my favourite, and which shares a similar time and setting to The Captive Heart).

There are also some minor characters I’d have liked to have seen more of: Molly and Biz, Eleanor’s forced companions on the voyage from England. I’m hoping they will be the subjects of a sequel or two (hint hint).

Overall, I enjoyed The Captive Heart and recommend it to fans of American Colonial fiction from authors such as Jack Cavanaugh, Laura Franz and early Deeanne Gist.

Thanks to Shiloh Run Press and NetGalley for providing a free ebook for review. You can find out more about Michelle Griep at her website, and you can read the introduction to The Captive Heart below: