Yesterday I reviewed Dawn on the Road, the debut YA novel from author Lea Waterhouse (click here to read my review). Today Lea is here to share her Friday Fifteen: the fifteen authors who have most influenced her life and writing.

Most authors who visit to share their Friday Fifteen share authors and books they've loved. Lea shares one she didn't love ... but which influenced her all the same. (And I have to say I agree with her!)

15 Authors Who Influenced My Life 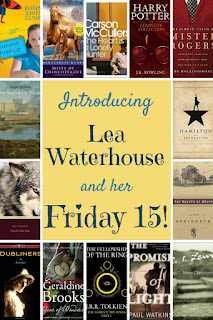 She arguably influenced my life more than any other author. After reading Summer Promise at age 14, I became a Christian. My parents allowed me to attend a church, and her continuing Christy Miller books were a constant companion during my early spiritual journey.

Brooks and Watkins are my two favorite contemporary authors. Their books are prime examples of meaningful historical fiction. I especially recommend Brooks’ Year of Wonders and Watkins Promise of Light.

Because I love travel and adventure stories! I think exploration and creation go hand-in-hand (which is why both are important themes in Dawn on the Road).

She was my first favorite author. I got her books from my elementary school library, and when I’d read them all, I started writing my own stories for the first time.

His deep insight into the human experience (and his particular affinity for working classes) changed the way I view the world and my fellow human beings, regardless of religion or background. Grapes of Wrath is especially poignant in the current political climate here in the United States.

Mere Christianity and Letters to Malcolm, Chiefly on Prayer are regularly re-reads.

The Heart is a Lonely Hunter digs deep (in an unpretentious way) into the loneliness and isolation of those often left without a voice in society.

This is an odd one to add here…because I don’t like his stuff. I know, I know: He’s “the best.” He was influential in making me realize I don’t have to force myself to like a writer just because other people say I should.

Because of the Lord of the Rings…obviously!

Obviously! If you ever visit Hobbiton, look me up and we can have Second Breakfast at The Shire's Rest Cafe.

He unwraps philosophy from a non-religious position, but is both fully intellectually and fully respectful of religion.

Harry Potter brought a whole new generation (and not just the born-bibliophiles like me) to view books as a delight--something to devour.

His was the first gospel I ever read. It added meat and truth to the glimpse of Christianity that Robin Jones Gunn’s books had given me as a teenager.

Some great choices ... and some inspiring titles to add to the to-read list. Thanks, Lea!

About Dawn on the Road

SHE’S HERE FOR THE RIDE. FOR THE ROAD. FOR INSPIRATION.

Dawn Berlin dreams of adventure, inspiration, and to feel something deeper. She’s certain that art will be the catalyst for these goals, except that the adults around her think she’s not being realistic. When Justin Devenport returns to her life the summer before her senior year, he convinces her to find inspiration on the road. Now she’s off, perched on the back of his motorcycle, heading up the coast to a preview weekend at an art school.

It isn’t long before Dawn realizes Justin’s view of inspiration is quite different than hers. He believes it comes from a God she was taught absolutely does not exist.

On the road, maybe she’ll find a friendship renewed. Maybe art. Maybe even love. Or perhaps she’ll find all three wrapped up in a different kind of inspiration, but only if Dawn can break from her upbringing, open her heart, and figure out what she believes.