Review: The Swap by Nancy Boyarksy 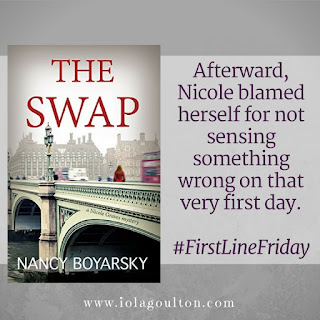 Great first line—it promises suspense by the bucketload, and that’s definitely what The Swap delivered. Nicole and Brad are from LA, and have swapped houses for three months with Muriel and Freddy Lowry of Chiswick, London. Nicole hopes the trip will help revitalise her marriage,

The thing which impressed me the most about The Swap was the research. I’ve lived in London, and the details were spot on, from the description of Victoria Station to Nicole’s fascination at her first visit to Sainsbury’s (one of the major UK supermarket chains).

Most books I read that are from American authors but set in England (or anywhere outside the US) are riddled with vocabulary and setting errors, so it was refreshing to find one that not only had no noticeable errors, but perfectly captured the London I remember. The only thing which caught me was when Nicole commented about how a character pronounced ‘vase’ as ‘vaaze’. Well, that’s how I pronounce it, so I was left wondering how Nicole pronounces it.

But that’s not to say the story wasn’t good. It was. Yes, I still have fingernails but only because I set the book aside a couple of times to recover. The plot and suspense were both excellent, with plenty of unpredictable twists. If The Swap has a failing, it would be that the characters weren’t quite as good. I didn’t get the impression Nicole grew or changed as a character, but that is often the nature of thrillers.

I checked the Light Messages website, and there is nothing to indicate they are a Christian publisher (despite the name, which seemed like the kind of name a small press focusing on Christian fiction would choose). I’m now left wondering why a general market publisher published the other book, which was full of Christian romance cliches. Perhaps that’s the explanation: they don’t publish Christian fiction, so didn’t realise the other book was full of badly written cliches and too many romance tropes.

No matter. I'm glad I read the swap, and I'll be watching for the sequel.

Thanks to Light Messages Publishing and NetGalley for providing a free ebook for review.
Posted by Iola at 08:00