Despite the name, Dr Billy Jack Tate is a woman. A woman doctor, in 1893 Chicago. She is offered a job as a doctor in the infirmary at the Woman’s Building at the Chicago World’s Fair. She meets Hunter Scott, Texas Ranger employed at the Fair in the Columbian Guard. The two get closer when Hunter finds an abandoned baby, and the two of them take it to Hall House, a home for foundlings on the outskirts of the slum district. As they get to know the area, they decide to work together to build a playground so the local children have a safe place to play. 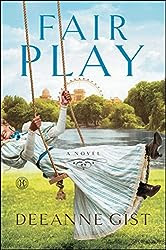 A huge amount of research has gone into the writing of Fair Play, as is evident from the authentic photographs at the beginning of each chapter. This authenticity was one of the strengths of the story, as it made it so much easier to see the deprivation in the slums, and the contrast between rich and poor. It was also gratifying to read at the end that many of the plot points, including the playground, were based on historical records.

I also liked the characters. Both Billy and Hunter were intelligent and ambitious, and both had a certainty in their occupational calling that provided some interesting misunderstandings. This was tempered by genuine caring for the plight of the poor … and each other.

Fair Play is a standalone novel, but is loosely related to It Happened at the Fair, also based at the World’s Fair. It is published by Howard Books, a Christian imprint, but I have to say that the content is more clean general-market romance than Christian, as there is no overt faith element. That’s a disadvantage for those looking for some Christian in their Christian fiction, but will be seen as an advantage by those who find some Christian fiction too preachy. However, it has all Deeanne Gist’s trademark passion and I’m sure her fans will enjoy it.

Thanks to Howard Books and NetGalley for providing a free ebook for review. You can find out more about Deeanne Gist at her website.
Posted by Iola at 09:00