Solid but not Spectacular


Elizabeth Trelawney has fled to her family home in Cornwall to escape an engagement she doesn’t want to a man as old as her grandfather. She is kidnapped by one Rowan Curnow, who is pretending to be a friend of her brothers. Can she trust him? Does she have a choice? 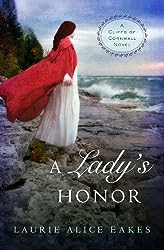 When Elizabeth eventually arrives, she finds her childhood friend is dead, her smuggler brother has run away to hide from the excise men, her cousin has been banished for getting herself into a ‘delicate situation’, and the best friend she hasn’t seen for ten years is homeless after the American heir to the estate just happens to be visiting. And it seems danger still lurks …

It’s a fast-paced story of mystery and intrigue as Elizabeth is challenged by her grandparents to find the family treasure. A Lady's Honor is the first novel in the new Cliffs of Cornwall series, and it’s unusual in that it doesn’t have the usual portrayal of smugglers as jolly good fellows who wouldn’t harm anyone, popular in gothic romances in years gone by. Eakes’s portrayal was uncomfortable in that regard, even if it is more accurate.

I did get hung up on a few glitches, including misquoting Shakespeare, misused words, inaccurate coinage, and the imaginary location of Bastion Point – there really is a Bastion Point in Auckland, New Zealand, and it’s famous for Maori land protests. Incidentally, while the book blurb calls it “Bastian Point”, it’s “Bastion Point” inside. Oops.

I’m also not convinced by the references to Conan Lord Penvenen (which made me think of Conan the Barbarian. Sorry). Shouldn’t that be Conan, Lord Penvenen? Or simply Conan, as they are talking about a close family friend?

My other issue was with the character of Rowan. We find out more about him as the story progresses, with some major revelations towards the end. While these did explain some of the questions I’d had about Rowan’s character, they also left me feeling as if I’d been deceived. Rowan was a viewpoint character, and while he was romantic and reliable as the hero, he was an unreliable narrator, and I felt as if all the conflict around his background was manufactured for the sake of introducing conflict, rather than being an intrinsic part of the story.

Despite these faults I did enjoy A Lady's Honor. It was a good combination of suspense, mystery and romance with a strong underlying Christian message about treasure and unconditional love. However, I didn’t enjoy it enough to read it again, and I’m not convinced I enjoyed it enough to bother reading the sequel when it comes out.

Thanks to BookLookBloggers for providing a free ebook for review. You can find out more about Laurie Alice Eakes at her website.
Posted by Iola at 09:00