Review: A Marriage of Convenience by Debra Lynn Collins 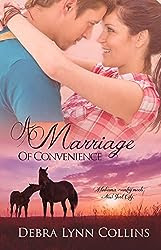 There’s something about the marriage of convenience plot that piques my interest. Perhaps it’s because we live in a society where arranged marriages aren’t the norm, and it’s interesting to see how a couple with seemingly nothing in common are thrown together by circumstance (aka the plot machinations of the author), and discover there is some commonality between them after all.

A Marriage of Convenience, debut novel from Debra Lynn Collins, has a lot going for it. A beautiful cover. Cowboys and horses. Good writing. Likeable characters, and a solid plot that manages to make what could be a contrived arrangement somehow work.

Lily Meyers is the widowed mother of five-year-old Joey, and the man she’s been employed by for the last three years has just died. She never expected to feature in Martin Chapman’s will, much less to inherit half of the Chapman Quarter Horse Ranch. But there’s a condition: she has to marry Martin’s grandson, Bryce Fowler.

For his part, Bryce has resented his grandfather for years, ever since the old man threw in his New York job, moved to Alabama to breed and train horses, and never wrote or called despite the fact Bryce was his only grandchild. But he wants his inheritance, so decides he’s prepared to go through with a platonic marriage of convenience. At least, that’s the plan …

Skip the italics if you don’t want to read the spoiler.


Everything was going well for the first 92% of the book. Well, if not exactly “well”, the plot was moving along with a good balance of conflict and resolution, and two characters who were gradually finding their way towards each other. Bryce has also discovered what a lying and deceitful piece of work his mother is, and has shared that information with Lily.

So when dear Sherry Ann calls Lily to tell her Bryce is in love with another woman, what does Lily do? Knowing Sherry Ann is a deceitful liar? That’s right. She believes Sherry Ann, and decides to break it off with Bryce. Really? Yes, this problem was resolved quickly, but it never should have happened at all only a few pages after Bryce told Lily how Sherry Ann kept his grandfather’s letters from him. It soured what, up until this point, had been an excellent story.

If you wanted to miss the spoiler, you can start reading again now.

Apart from that I did enjoy A Marriage of Convenience, but if stupid characters annoy you, I recommend you stop reading at the end of Chapter Twenty Four.

You can find out more about Debra Lynn Collins at her website.