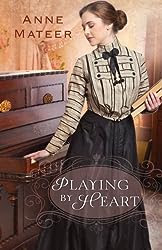 Miss Lula Bowman is the first female winner of the Donally Mathematics Award, which provides her with an income as a college lecturer, and the ability to further pursue her studies and become the first female PhD in the state. But her plans go awry when her brother-in-law dies, leaving her sister with four children and no way to support herself. Lulu is offered a job teaching high school music—which she can do—and coaching the girls’ basketball team—which she has no idea about.

Chet Vaughn is the school mathematics teacher, and coach of the boys basketball team. He has been hounded by previous husband-hunting music teachers, so is determined to keep this new female at arm’s length … until he meets Lula Bowman, who is determined to keep well away from him, and to leave town as soon as she can.

Playing by Heart was written in first person, with chapters alternating between Lulu and Chet’s points of view. This made it pretty obvious what the end result was going to be (a little surprise would have been nice), and I occasionally had to backtrack to remind myself who the viewpoint character was—it took a while before I was able to tell the difference. My other issue was that it took a while for me to tell when the story was set (World War One), which didn’t help my initial confusion.

However, once I worked out who and when, I found myself in the middle of an interesting story. I always admire intelligent characters, and Lulu was no exception, especially as the story progressed and we gradually found out more about her history and why she was so determined to escape her hometown and pursue her academic career.

I also found Playing by Heart had some interesting observations to make about parental expectation. Lula’s mother had encouraged her musical talent, while her father encouraged her ability to understand complex mathematical problems (I suspect these gifts are two sides of the same coin). It’s an important lesson we all have to learn, that we need to discover who we are in God, not simply to meet the expectations of those around us. A solid read, recommended for historical romance fans who like something a little different.

Thanks to Bethany House and NetGalley for providing a free ebook for review. You can find out more about Anne Mateer at her website.
Posted by Iola at 09:00