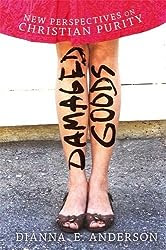 Damaged Goods: New Perspectives on Christian Purity starts off as a challenge to the purity culture prevalent in many American Christian churches, as typified by books such as I Kissed Dating Goodbye. I’ve never been a part of this culture: I’m not American, I come from a culture where American-style dating has never been common, and *cough* I’m too old (I was already married by the time the book was published in 1997). In fact, the first I heard of the purity culture and the concept of courtship was in a recent blog post that went viral: Thomas Umstattd Jr on Why Courtship is Fundamentally Flawed.

However, Dianna E Anderson is writing from a different perspective: as a Christian woman with feminist beliefs who grew up in the purity movement, and has subsequently come to question many of the foundational principles. Umstaddt’s article highlighted some concerns he has with the courtship concept, based on his own experience and the experiences of men and women he knows. Anderson takes this several steps further by analysing the “myths” purity culture is based on from a feminist perspective (while feminist views on Christianity are nothing new, I know many conservative Christians dislike the idea because they don’t truly understand what “feminist” means. Clue: it doesn’t mean we hate men. We do believe God created men and women equal. Different, but equal).

I don’t agree with all Anderson's conclusions. In particular, she completely failed to persuade me about one of her core points around sexual ethics in relation to her interpretation of Biblical fornication. Her interpretation has merit: I just don't agree with the conclusion she draws. However, it’s a useful argument if only to show why some people choose to believe as Anderson does. I’d be disappointed if Christian readers (and leaders) dismissed all Anderson's views simply because they disagree with her on one or two points (albeit major points).

It’s also unfortunate that she cites ex-Mars Hill pastor Mark Driscoll as an argument against the purity movement. I don’t know much about Mars Hill or Mark Driscoll beyond reading his “apologies” in regard to accusations of plagiarism and using church funds to buy his way onto bestseller lists, but I’m inclined to ignore anything he says on that basis. But Mark Driscoll being wrong doesn’t necessarily make Dianna E Anderson right.

Anderson also discusses the Quiverfull movement and modesty theology, two subjects on which she and I agree wholeheartedly. I also agree with her views on sexual violence—I find it distasteful to think that any Christian man would consider a woman who has been a victim of rape as somehow less godly than the next woman (or man). If Anderson is correct in saying “the American evangelical church has failed to equip congregants with the ability to tell the difference between sex and rape”, then something is seriously wrong.

I’m sure Damaged Goods is going to come under scrutiny from a section of the church for failing to submit to the “man knows best” propaganda prevalent in many churches. I’ve no doubt some reviewers will be mansplaining how and why Anderson is wrong. They will be missing her main point: that, too often, purity culture idolises virginity, yet salvation is through Jesus alone, and God forgives all our sins, including sexual sin.

I hope Damaged Goods opens up debate around the place of sex in the Christian life, and that virginity isn’t the sole measure of a right attitude to sex. Recommended for those open-minded enough to concede that contemporary churches aren’t perfect.

Thanks to NetGalley for providing a free ebook for review.
Posted by Iola at 09:00