A Sequel with Heart 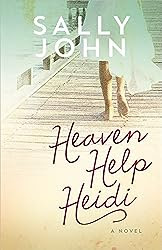 Heaven Help Heidi is the second novel in Sally John’s Family of the Heart Series, although you don’t need to have read Between Us Girls first (although—as with most series—it is best to read them in order to avoid spoiling the storylines relating to the recurring characters). The series is set in San Diego, in the Casa de Vida Cottages in the fictional Seaside Village. As with Between Us Girls, the story starts with a young woman who needs a new start moving into Casa de Vida, befriending one of the existing residents, and finding the answers to questions she didn’t know she had.

Heidi Hathaway is a successful real estate salesperson, but horrific injuries sustained in a car accident mean she can’t drive and she can’t navigate the stairs in her beautiful three-story condo. Piper, a business acquaintance, invites her to move into a vacant cottage at the one-level Casa de Vida. Heidi accepts, mostly because she has no other options. Her ongoing health issues mean she can’t work to the capacity she used to, which means Val, her friend and boss, is having to take on more and more—but Val has problems too. Piper has her own issues. Her fiance died four years ago, and although she still misses him, she’s finally learned to cope without him.

What I thought lifted Heaven Help Heidi above Between Us Girls was the hidden linkages between the characters. Heidi moving into Casa de Vida is the catalyst that forces some of the minor characters to reconsider their perceptions of the past, and to look for reconciliation, and I enjoyed this aspect. The novel has underlying Christian themes, but while several of the characters (especially Liv) are Christians, it’s not in-your-face preachy Christian fiction (in fact, the Christian aspects felt a bit understated at times).

There is also a touch of romance in the novels (well, perhaps more than a touch). Part of me would like to see more on-page development of the relationship, but I think I see the point Sally John is making by keeping the romance low-key. We can’t rely on a man to come in and “fix” our lives. We have to sort through things with God first, and then we can come to a place where we are ready to share our lives with someone else. It’s not that we’re “fixed” (are we ever?), but that we know who we are in ourselves and in God. That knowledge and security allows us to open ourselves to new personal and professional possibilities. Thought-provoking.

I really enjoyed Heaven Help Heidi, and I’ll be looking forward to the next book in the series.

Thanks to Harvest House and NetGalley for providing a free ebook for review. You can find out more about Sally John at her website.
Posted by Iola at 09:00