Audiobook Review and Giveaway: How A Star Falls by Amber Stokes


This review is something new for Iola’s Christian Reads, because How a Star Falls isn't actually a read. It’s a listen: an audiobook, courtesy of Rivershore Books Book Tours and Amber Stokes. 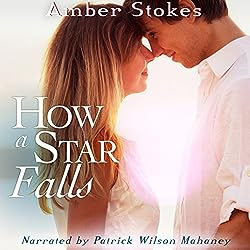 I know a lot of people rave about audiobooks, but I’ve never seen the appeal. The audiobook that’s twelve hours of listening time is probably only four to six hours of reading time, and I’d rather read the book (especially when I can read it on my Kindle). But I’ve recently started a new job which involves two three-hour drives each week, so the idea of using audiobooks to help pass the time and reduce the monotony has a certain appeal. So I was pleased when I was invited to participate in this audiobook blog tour.

Apart from the time commitment, my other issue with audiobooks is the importance of the narrator. A good story can be ruined by bad or indifferent narration, something I have experienced with my previous ventures into audiobooks. Sometimes it’s narrators who try too hard to make their voices different for different characters, to the point where it’s off-putting. Other times it’s narrators whose voices are so monotone, I can’t tell the difference between the characters, which can make for confusing listening.

In the same way, a good narrator can make a story better. That was the case for me with How a Star Falls, narrated by Patrick Wilson Mahaney. Although it’s a romance, most of the novella is from Derek’s point of view, which made a male narrator the logical choice, and Mr Mahaney was excellent—clear and full of expression, with a slightly dreamy quality appropriate for a romance.

The other thing I particularly enjoyed was that How a Star Falls is a novella, so the entire recording is a little under two hours—something I could easily listen to while driving and finish all in one journey (and downloading from Audible onto my phone so I could listen was a breeze). I did notice one curious thing while I was listening: some words and phrases which might have annoyed me in the written book (like too many dialogue tags) worked just fine in an audiobook. I suspect this is a testament to the talent of the narrator.

But what did I think of the story?

Derek isn’t living the dream. He believed “them” when they said he’d have a better career and earn more if he went to college, so why is he now working a low-wage job as a sales clerk in a music store and paying off student loans? He’s musing about the injustice of it all while taking one of his favourite walks … where he comes across a woman in a wedding dress, sleeping on a bench at the top of the hill.

He wakes her because it’s about to get dark, and she says she’s a fallen star, from the edge of the constellation of Orion. Derek doesn’t exactly believe her, but it’s getting dark and she doesn’t have anywhere to go, so he does the gentlemanly thing and offers to take her home. Derek shows himself to be a nice guy who deserves more. Brielle (as he calls her) is naïve and imaginative, loves dancing, and helps Derek to reconsider how he thinks about his “career” and his family.

How a Star Falls is a gorgeous romance reminding us that we are responsible for our own choices, and that the life we are living doesn’t have to be the life we live. We can change things. And I liked and appreciated that reminder.

A lovely story that left me with a smile on my face even in rush-hour traffic.

You can find out more about Amber Stokes at her website, Seasons of Humility.

Experience How a Star Falls as you’ve never heard it before! Enter to win one of three digital audiobook copies of the novella using the Rafflecopter form below. Open to anyone who can access Audible.com. (Prizes will be distributed using promo codes through that site.)

There are also ebook and paperback versions available: Click here to go to Amazon