A Book Made into a TV Series

I’m not a big TV watcher—there are too many books to read! But I remember watching Christy on television in the early 1990’s, then buying and reading the novel the series was based on. I’ve now reread it, and conclude it absolutely deserves its place as one of the classic Christian novels. It’s also the book which inspired the Christy Awards, annual awards celebrating the best in Christian fiction.

Christy was first published in 1967, and is based on the story of Catherine Marshall’s own mother and her experiences teaching in Cutter Gap, in the Great Smoky Mountains in 1912. It’s told entirely in first person, from Christy’s point of view, and this gives the novel a contemporary feel despite its age.

At just nineteen, Christy is young to be given sole responsibility for teaching almost seventy children in the one-room school, especially when some of them are only a couple of years younger than she is. Yet after her initial settling-in period, she makes it sound easy, and the novel moves outward to look at the lives and beliefs of those Christy shares the Cove with. They have deeply held traditions and beliefs, and are resistant to change (some are still recovering from the changes introduced by the War Between the States, despite it being over for some sixty years).

It’s definitely a character-driven novel as we watch Christy settle into the difficult and remote life, and make friends with some of the local women. It’s also an almost first-hand account of life in this difficult and often depressing environment, but Christy (and Marshall) manage to look at most events with intelligence, discernment, and often a touch of humour.

If you’ve never read Christy, do. Catherine Marshall was one of the premier Christian writers of her time, and Christy is one of only two novels she ever wrote. Both Christy and Julie show her depth of understanding of things of God, and are well worth reading.

This book counts towards my 2015 Reading Challenge as a book made into a TV series. 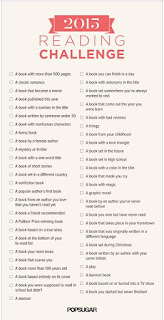