For my African Friends (whether you live in Africa or not!) 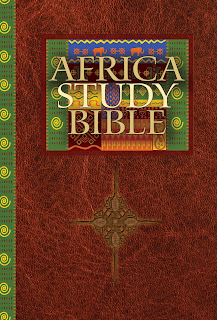 This isn't a typical Iola's Christian Reads post. But it's a post about something I believe is important, and I wanted to share it with you—to share with your friends, with your fellowship, and to pray about (or even contribute towards via the Kickstarter campaign, which you can find here: Africa Study Bible Kickstarter Campaign).


Introducing the Africa Study Bible from Oasis International and partners.

From the press release:

Millions of English-speaking Africans know and love Christ, but for many, God’s word is hard to grasp. With nearly every full evangelical study Bible written from the viewpoint of the United States and United Kingdom, Africans have lacked a resource that connects with their unique experience, hindering discipleship.

But that is about to change as major Christian organizations, led by Oasis International, are joining together to launch the Africa Study Bible (ASB), a six-year, cross-continental effort that has produced the first study Bible developed by Africans for Africans.

“With the ASB, we’re bringing the power of Scripture to Africa in a new and culturally relevant way,” says Dr. Matthew Elliott, president of Oasis, publisher of the ASB.


“Under the leadership of an 11-member editorial board of scholars from across Africa, we’ve brought together 350 writers and editors from over 40 African countries, representing 50 denominations. This is an unprecedented project that will impact the global church.”

With the editorial nearly complete, Oasis, with the support of its partners, is inviting fellow Christians to join with them in helping get the ASB into the hands of Africans. With a goal of raising one million dollars to print the first 100,000 copies, Oasis is seeking private donors as well as launching a Kickstarter campaign, which begins April 18 and runs through June 16.

Contributors to the Kickstarter campaign have the opportunity to receive incentives ranging from artwork prints to limited Italian leather editions of the ASB as well as all-expense paid trips to the launch of the ASB in the United States and in Africa.


“Our goal is to have the first run of the ASB available in Africa by the end of 2016,” says Elliott. “We already know of more than 100 million people in denominations and movements in Africa whose leaders want to use the ASB for discipleship so there is a lot of anticipation throughout the continent.”

Designed to grow the faith of African church members, teach them to evangelize their communities, and apply a biblical worldview to their society, the ASB uses the New Living Translation and includes 2,400 plus features such as application notes, stories and proverbs, touchpoints that link Africa and the Bible, learn notes that explain basic theology, and major theme articles that apply the Bible to key issues. Oasis plans to initially release the ASB in English with French and Portuguese translations in development. Oasis is also developing a full-featured app of the study Bible.


“We have seen the hand of God in amazing ways throughout the development of this project,” says Elliott. “In the words of our supervising editor, Dr. John Jusu, the content of the ASB is bubbling up from the cultures of Africa. The biblical truth is percolating through our own cultures and stories to create a rich and textured tapestry that Africans can claim as their own.”

This video introduces the project, and why it's important:

The English translation is done, and now Oasis International are seeking donations to fund the printing of the first 100,000 Bibles. French and Portuguese translations will follow, and these will enable 70% of literate Africans to read the Africa Study Bible.

Campaign pledges start at USD 5 (for which pledgers receive a social media shout-out and access to the online version of the Book of Genesis), to USD 10,000, which includes an all-expenses-paid trip to Kenya for the launch of the Africa Study Bible. Yes, I'd love to, but unfortunately, the higher rewards are only available to residents of Canada and the US (rewards up to USD 500 are available for Australia, Canada, New Zealand and the European Union).

While the Bible isn't yet ready for production and there are no reviewer copies available, Oasis International have provided me with a link to the front matter and the Book of Genesis, and I'm impressed.

It's obvious a huge amount of work has gone into this project. There are contributions from hundreds of African pastors, and traditional sayings and stories from across the continent are used to illustrate the Biblical principles. I can see this project will be of huge benefit to Christians across Africa—and to Christians outside Africa who'd like to learn more about the similarities and differences in African cultures.