Today I'd like to welcome Heather Blanton to Iola's Christian Reads. I reviewed A Lady in Defiance, her debut novel, last month at Reality Calling, and am delighted to announce Radiqx Press have awarded Heather with a Redemptive Fiction Award of Excellence: 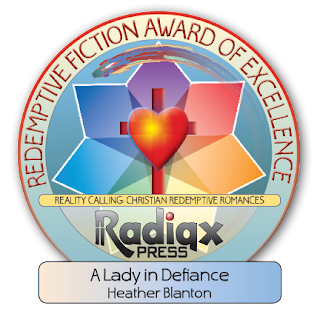 Now Heather's newest book in the series has recently released—A Promise in Defiance. 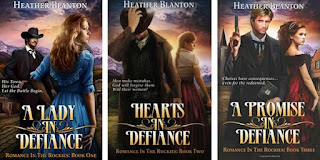 Now she's going to share some of her favourite novels with us. Welcome, Heather!

The first Christian fiction book I read that showed me the right story CAN carry real spiritual truth. The heroine finally gives her dreams up for what God wants for her and she finds true joy in that!

2. The Mirror by Marlys Millhiser

Just a little gothic suspense story that carried me back in time during some cold, winter days in high school. I’ve read it many times since!

3. The Masque of the Red Death

Poe’s most masterful use of nearly all the senses. A truly visceral story. You hear it. You smell it. You see it. Dang he was good.

4. The Dead Zone by Stephen King

King has a conversational style in his writing that sets him apart. You forget you’re reading. 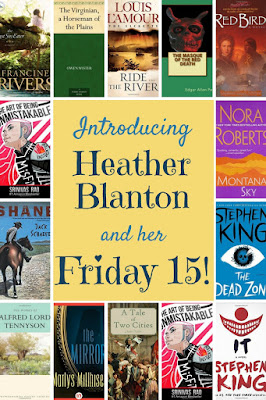 5.It by Stephen King

Then he writes something stupid like It. I pray to God I never write a book with such a catastrophically disappointing ending.

6. Ride the River by Louis L’Amour

The consummate Western author. He has transported me back to the Wild West more times than I can recall, but this story about Echo Sackett is my favorite.

7. The Virginian by Owen Wister

Speaking of Westerns, Owen Wister wrote this gem. While it has a few oddball curves in it, like stepping out of the story to address capital punishment, that gunfight at the end left me breathless. It is awesome. For anyone who loves the West, you’ll “get” every sentence.

A slow-burn of a book built on tension and told through the eyes of a young boy. A stunning POV full of subtle nuances, but the themes of honor, courage, and self-determination tower!I read it in high school and it has always stayed with me.

I’m from Western North Carolina and I felt like I was walking through the Mt. Laurel along with Cadi and suffering her guilt right along with her. Masterful internal dialogue.

10. Several of the poems by Tennyson

A masterful poet, I had only read him when I had to take an English class a few years back. And it was like, “Wow, look what I’ve been missing?” Studying poetry gives one the chance to look at the power of words in a micro scale. Sentences, sometimes mere phrases, carry a wollop.


Tears, idle tears, I know not what they mean,

Tears from the depth of some divine despair

Rise in the heart, and gather to the eyes,

In looking on the happy Autumn-fields,

And thinking of the days that are no more.

11. The Art of Being Unmistakable: A Collection of Essays About Making a Dent in the World by Srinivas Rao

Rao was tied up in a world of expectations and none of them were his own. These essays tell how he broke free. For me, this secular book got me to quit looking at what the Christian publishing world expects and write what God gives me!

12. A Time for Christmas by Heather Blanton

Speaking of breaking free from toxic expectations, I should list In Time for Christmas by me! I wrote this story in high school, finally decided to re-write it and publish it in 2014. A time travel romance based on a particular scripture, it’s out of the box and out of my genre, but it paid for Christmas one year. So the moral is sometimes, you’ve just got to follow your heart.

A story of three sisters looking for a murderer on a Montana ranch. I read this back in ’96 when my sister Susan was alive. After she passed away, this is the book that gave me the idea to write about three sisters facing challenges in a rowdy mining town.

14. A Tale of Two Cities by Charles Dickens

The first book I remember reading that really brought home the nobility of sacrifice, outside of what Jesus did. A mere man, not a god, who laid down his life for his friends and his country. A beautiful story.

15. The Screenwriter’s Bible by David Trottier

I could list a hundred books on the craft of writing, but this one by David Trottier was so concise, so clearly and simply written, it opened up plotting for me like no other. I used to write by the seat of my pants, but something about this book helped me SEE my stories, start to finish. I write so much faster now! 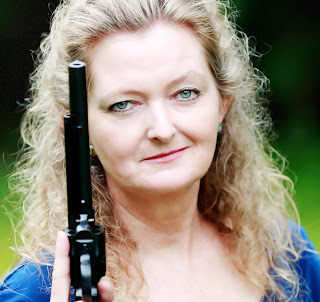 A former journalist, Heather is an avid researcher and skillfully weaves truth in among fictional story lines. She loves exploring the American West, especially ghost towns and museums. She has walked parts of the Oregon Trail, ridden horses through the Rockies, climbed to the top of Independence Rock, and even held an outlaw's note in her hand. You can learn more about her and her work at https://ladiesindefiance.com/ or https://www.facebook.com/heatherfreyblanton.

Sign up for Heather’s email newsletter to receive the latest book release updates, as well as info about contests and giveaways (https://ladiesindefiance.com/).

Heather is the independent bestselling author of several Christian Westerns, including the Romance in the Rockies series, which has sold over 40,000 copies. Intrigued by the concept of three good sisters stranded in a lawless Colorado mining town, a few notable Hollywood producers have requested the script for her first book in that series, A Lady in Defiance. Heather’s writing is gritty and realistic. In fact, her books have been compared to AMC’s Hell on Wheels series, as well as the legendary Francine Rivers book, Redeeming Love.

She writes Westerns because she grew up on a steady diet of Bonanza, Gunsmoke, and John Wayne movies. Her most fond childhood memory is of sitting next to her father, munching on popcorn, and watching Lucas McCain unload that Winchester!

She can be reached several different ways:

Email ThisBlogThis!Share to TwitterShare to FacebookShare to Pinterest
Labels: A Lady in Defiance, A Promise in Defiance, Friday Fifteen, Hearts in Defiance, Heather Blanton