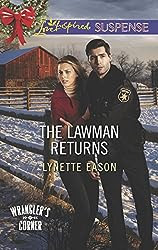 Social worker Sabrina Mayfield is concerned for one of her teenage clients, who has disappeared in mysterious circumstances, leaving behind a wallet that belonged to Steven Starke, who was murdered four weeks ago. Clay Starke has returned to Wranger’s Corner as the new Sheriff’s deputy, replacing his brother, and hoping to find some clues to his brother’s murder. He isn’t expecting to find himself attracted to the lovely Sabrina, who he remembers from his high school days.

For her part, Sabrina isn’t expecting to feel this way about a Starke, not given the history between their respective families. However, they’ll all have to deal with it if they are to solve the mystery of the missing teenager, and the unsolved murder.

The Lawman Returns wasn’t Lynette Eason’s best romantic suspense novel, although that’s partially because it’s a Harlequin, which means it’s shorter, which doesn’t give the author a lot of scope to develop the plot. However, it’s also not her worst (I’m still trying to read Nowhere to Turn. I’ve started it twice and made it a quarter of the way through, but it’s just not grabbing me).

One thing that puzzled me was that the town of Wrangler’s Corner apparently only had a population of 1,037 (not sure if that was before or after the murder), but it had a police department with several officers, and a full hospital. America must have more hospitals per capita than where I live in New Zealand (which might partially explain US healthcare costs). So that required a little suspension of disbelief …

For what it is, The Lawman Returns is a good category romantic suspense novel, a quick and enjoyable read with more plot twists and spiritual depth than most.

Thanks to NetGalley and Harlequin for providing a free ebook for review. You can find out more about Lynette Eason at her website.