Review: The Secret of Pembrooke Park by Julie Klassen 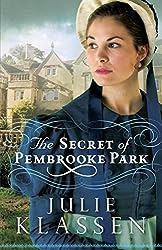 Abigail Foster had always expected to marry neighbour Gilbert Scott, but that looks to change when he goes abroad and her family find themselves almost left almost destitute after an investment goes wrong. The family is offered the free use of Pembrooke Park, the deserted estate of distant relatives on her father’s side. Here Abigail meets William Chapman, the local curate, and Miles Pembrooke, the possible heir to the estate which has been vacant for close to two decades following a death—and possibly a murder.

There is an old story of the house hiding some kind of treasure. If so, Abigail could help restore the family fortunes which she feels responsible for losing. But noises in the night and footsteps in the dust suggest she’s not the only person searching. And who is sending her anonymous letters?

The writing in The Secret of Pembrooke Park was excellent, the characters interesting, and it was a complex plot, with several unexpected twists and turns. I liked that. I especially liked the fact that while I’d worked out one of the character was hiding a major secret, I was completely wrong in what that secret was—yet when it was revealed, it made perfect sense.

Julie Klassen is one of my favourite authors, I haven’t especially enjoyed her last couple of novels, which seemed to lack the original spark which first drew me to her writing. I’m pleased to report that The Secret of Pembrooke Park is as good as those early books, with a healthy mix of mystery, suspense and romance (and a choice of possible suitors, with Gilbert, William and Miles).

Recommended for fans of historical romance, especially the Regency period.

Thanks to NetGalley for providing a free ebook for review. You can find out more about Julie Klassen at her website.