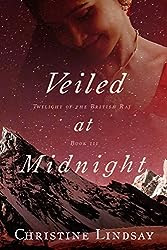 Veiled at Midnight is set in the final days of British rule in India, a time of uncertainty as the country moved towards self-government after two hundred years. It was also a time of political unrest due to the spectre of Partition: the division of India into two countries based on religion. It’s a fascinating backdrop, and one that really adds to the plot.

Veiled at Midnight is the third book in Christine Lindsay’s Twilight of the British Raj series. It’s set a generation on from the first two books, so can easily be read as a standalone novel, as it focuses on brother and sister Cam and Miriam Fraser. Cam is an army officer who had a bad war and isn’t really coping with life until one day he sees Dassah, the Indian girl he and Miriam grew up with, the girl who suddenly disappeared after he kissed her. Circumstances bring them together again … but not for long.

Miriam is a confirmed spinster, devoting her life to her job as a teacher at a school for girls. She has her own romantic problems when she is pursued by a handsome army officer who threatens her understanding of herself and challenges her beliefs about her brother. It’s a complex and exciting plot with four strong lead characters--Cam, Dassah, Miriam and Jack—set against a fascinating historical backdrop, and a mix of the expected and the unexpected. Recommended.