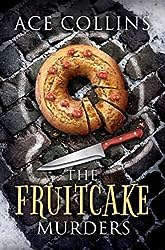 It’s the holidays in New Zealand, so I’m taking the opportunity to ‘bury’ reviews of books I didn’t finish or didn’t enjoy.

The Fruitcake Murders started with a Christmas 1926 murder in Chicago, then skipped forward to December 1946 and another murder. I’m guessing the two were related, but I didn’t get that far. The first murder (the Prologue) was mostly told, as there was only one person in the scene until the end.

The second murder was overshadowed by “witty” banter between Lane Walker, a detective, and reporter Tiffany Clayton. The dialogue was torturous, and the dialogue tags made it unbearable. Here’s an example:


“I’m guessing it is murder,” she sadly observed as she pulled a pad and pen from her purse.
“Your observations were always brilliant,” he cracked,
“Not much to it,” she noted, “you’re from homicide.”

There was a note at the beginning of the book that this is an advance reader copy “which has not been edited or proofread”. That accounts for the comma after “cracked”, but it’s no excuse for having “noted” three times in two pages, or for the completely distracting dialogue tags (most of which were inappropriate, like using “explained” when the character wasn’t actually explaining anything. That's plain old bad writing. Or possibly mansplaining).

There might be a good murder mystery hiding here, but I found the writing too distracting to motivate me to persevere.

Thanks (?) to Abingdon Press and NetGalley for providing a free ebook for review.
Posted by Iola at 09:00

Email ThisBlogThis!Share to TwitterShare to FacebookShare to Pinterest
Labels: 2015 Release, Did Not Finish