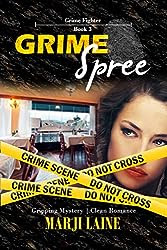 Shadows from her past have haunted Dani’s dreams for months. Now, however, the ghosts are real and bringing a trail of death and destruction.

What begins as a romantic evening, the first in far too long, collapses into yet another crime scene. However, this one has someone involved who is familiar to Dani. Too familiar. And worse, he recognizes her.

Jay’s new promotion has increased his working hours considerably, as well as interrupted and cancelled more than one date with Dani. His attempt to make it up to her at one of the nicest restaurants in the area backfires when the place is robbed.

But the biggest problem is that Dani seems to be in on the crime.

Grime Spree was a short, fast-paced novella following the next steps in Dani and Jay’s relationship—and the next crime they become involved in. This one is more personal: Dani and Jay were at the crime scene before the crime was committed, and Dani recognised someone who knew her from her old life. And Jay is having trouble trusting her, because he knows she’s hiding something from him.

It’s a big ask in a relationship, one person having secrets they can’t share, and the other knowing something is there but not knowing what. Yes, it brings an interesting dynamic to the relationship, especially when intentions and reality don’t exactly fall into line.

Grime Spree is the third novella in Marji Lane’s Grime Fighter series, and the stories should be read in order: Grime Beat, Grime Wave, Grime Spree. I’ve enjoyed getting to know Dani and Jay over the course of this series, and while I’m looking forward to the next (and possibly final) instalment, I’ll also be sad when it’s over.