Is historical chick-lit a thing? 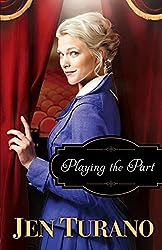 If it's not, it should be. I love Jen Turano’s brand of humorous historical fiction—it’s a historical version of chick-lit, only without the bawdy bits. And she manages to touch on some of the less nice elements of history, like the lack of women’s rights, without ever becoming maudlin or preachy. I’ve read all her novels, and she hasn’t failed me yet.

Breaking Free is no exception. It’s the third book in the A Class of Their Own series, but can easily be read as a standalone (although fans of the series will be pleased to find the earlier couples all feature in supporting roles, as does Abigail, the busybody matchmaker).

When New York actress Lucetta Plum is threatened by an unwanted suitor, Mrs Abigail Hart, Lucetta’s self-appointed godmother and protector, decides a visit to her grandson is in order. Bram Haverstein is an eligible bachelor who’d rather be left alone. Well, as alone as he can be in an American castle full of misfit servants. But he’s prepared to make an exception for Lucetta Plum, the actress he admires above all others. Only problem is that she loathes any and all admirers . . .

Playing the Part is great fun, because as well as the stalker and romance plots, there is also the mystery about the castle: is it haunted? If not, why do strange things keep happening? (There’s the almost-predictable missing jewels and walking armour, but there’s the funnier question of how did the woman-hating goat get into Miss Plum’s tower room?).

All in all, great fun for those looking for a lighthearted read with a serious undertone.

Thanks to Bethany House and NetGalley for providing a free ebook for review.

Have you read any of Jen Turano's novels? What did you think?