A number of years ago, my friend really wanted a cat, but her husband said he didn’t want all that fur all over. Not to be detoured, she researched and bought a hairless cat, also known as a Sphynx. 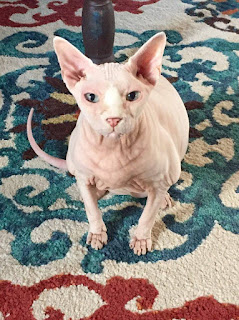 I’ve always enjoyed being owned by cats…mostly. (We never really own them, right?) I’ve lived with a number of them over my lifetime, all with their own very  distinct personalities, some sweet, some not so much, most a bit quirky. I was excited to meet her hairless cat. He was quite a character, and he really stuck in my mind. Sadly, that kitty passed on, but my friend has acquired another Sphynx that she loves dearly.

Years later, I began writing, and pets seem to make an appearance in my stories, probably because I usually have my dog plus one of our cats staring at me or sitting on me when I write. In my fourth book in the Southern Hearts Series, Blown Together, my heroine is a romance writer who is highly allergic to pollen and dust, and dating has never gone well for her. Being a bit lonesome, I knew she would have a pet. My friend’s hairless cat came to mind. The perfect fit for my isolated, allergy-prone author named Elinor. She writes romance novels set in the 1800s and is a fan of Jane Austen, so, of course, the Sphynx had to be named Mr. Darcy.

So what about you? Are you a cat person? Dog person? Either way, I hope you enjoy meeting Elinor and Mr. Darcy in Blown Together!

About the Author:
Janet W. Ferguson grew up in Mississippi and received a degree in Banking and Finance from the University of Mississippi. She has served her church as a children’s minister and a youth volunteer. An avid reader, she worked as a librarian at a large public high school. Janet and her husband have two grown children, one really smart dog, and a few cats that allow them to share the space.

When love storms in…

Wealth manager Sam Conrad is accustomed to his domineering father ordering him around, especially at the bank where they both work. But when his father demands that Sam manage the inheritance of his bossy ex-fiancée, Sam has finally had enough. He leaves in search of a new life, and attorney Big Roy Bosarge from Mobile, Alabama agrees to mentor Sam on his quest for direction. Sam didn’t expect to be thrown together with Big Roy’s eccentric and opinionated daughter.

Storm damage forces lonely romance writer Elinor Bosarge and her hairless cat, Mr. Darcy, out of her Fort Morgan Beach cottage. She plans to take refuge in the boathouse on her parents’ estate, but finds the place already occupied by one of her father’s “projects.” She’s shocked her father would allow another young man onto the property after his last mentee robbed her family and broke her heart. And from the moment she meets Sam Conrad, they disagree about everything from her cat to how to best renovate a local nursing home.
​
Between her mother’s health issues and the hurricane brewing in the Gulf, Elinor feels like her life is being ripped apart. It doesn’t help that she’s falling for the man she’s determined not to trust. Sam finds himself drawn to Elinor, wanting to help her and this new family he’s grown to love. But can he overcome the barrier she’s built to keep him out? When the storm rages and the two of them are blown together, can Elinor find the faith to open her heart again?

Visit all the stops along the tour