Today I'd like to support Cecily Wolfe to Iola's Christian Reads. Cecily's debut novel, Throne of Grace, releases today. Now she's going to share some of her favourite novels with us. Welcome, Cecily! 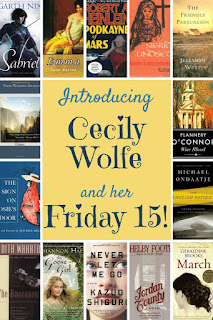 This disturbing children’s story is a fantastic look at human nature – it is also one of the most spectacular examples of writing I have ever seen.

I can still recite the words to this one . . . a nostalgic look at the freedom and creativity of childhood. My favorite book ever.

I’ll read anything by Nix. The writing is stunning, and the stories are fascinating. The characterization is incredibly realistic, and I find myself relating to these women in different ways with each reading.

And you thought your family was messed up? The ties between the past and present are Foote’s strength, and his characters are as unforgettable as they are disturbing.

5. The English Patient by Michael Ondaatje

One of the greatest love stories ever – but really, this is all about power. The movie is great (Colin Firth, Ralph Fiennes – oh, yes), but be sure to read the book as well, or you’re missing some smooth writing by a master.

6. The Friendly Persuasion by Jessamyn West

This one makes me cry every time. Simple folk in a simple world, with complex feelings and relationships that make them anything but ordinary. This is a look at the life of a couple, from youth to death, as well as the home and family they create. This is about as American as it gets.

Who doesn’t adore Austen? Quick wit, charming romance, misunderstandings – with some life lessons thrown in when you might not expect it. I always catch myself analyzing my own behavior and motivations after reading Austen, whether it is the fifth or the fiftieth time.

Cloning scares me, and this story sure didn’t make me feel any better about it. The writing is sharp and clear, a cold contrast to the intensity of emotions and exploration of identity. What does it mean to be human? Are we really just a jumble of body parts, and what price do such parts carry? Money equals power, but to what ends? I get upset just thinking about this book, but it has influenced me in ways I’m not sure I understand very well.

Little Women is often described as a children’s book. People must be kidding, or else they are reading a different book than I am. When the girls’ father returns from the war, we don’t get much on him, and that has always bothered me. Brooks tells about his experiences in the war and who he is beyond a few words in what is really a difficult commentary on family life and the role of women during the Civil War.

Howells doesn’t get any attention these days, which is very sad. He has been a grandfatherly guide to my own literature studies, and I appreciate his attention to physical details and life in America post-Civil War. This reads like a travel journal, and is beautifully diverting.

Kristin’s story is a long one (over 1000 pages) covered in three books and pretty much shares what it is like, emotionally, to grow up. Making mistakes, overcoming emotions, connecting (and disconnecting) with others – this is one heck of a soap opera. Fourteenth century Norway has never been so interesting. As a Catholic, I am particularly fond of Kristin’s faith journey.

12. The Buccaneers by Edith Wharton

The only Wharton with a happy ending – because she died and someone else finished it decades later. Fans of Gilded Age America and the trend for wealthy girls to travel to Europe and marry nobility (yes, that would be me) will find the perfect fairy tale romances - and their attendant troubles – here. Wharton does a fine job of detailing the drama of the mind in all of her work, reminiscent of her friend Henry James.

13. Podkayne of Mars by Robert Heinlein

My favorite Heinlein. A teenage heroine heading from her Mars home to visit Earth must make adult decisions when those she loves are endangered. This was published in the early 1960s, before the abundance of teen heroines came into play. If you don’t love sci-fi (like I do) but like tough, smart girls, Poddy’s for you.

Classic and disturbing. Classically disturbing. O’Connor is so compelling, so sarcastic, so honest. There is a recording of her reading one of her stories (you can Google it) and her breathless, accented race through fierce prose is hilarious and terrifying. There is something dark in all of us, and O’Connor makes sure we don’t forget it.

The writing is good but not noteworthy, but the story is a wonderful triumph of a girl in poverty rising above – just as all Cookson’s stories are. She is an escape into a world where anything is possible, if you don’t give up and don’t let those rotten rich boys who grab at you get you down.

Ceci Wolfe writes whatever her characters tell her to write. A Harvest of Stars is realistic, literary fiction about two teens dealing with abuse in a small Kentucky town. Throne of Grace is a historical inspirational romance set in beautiful turn of the century Newport, Rhode Island. Her stories have been published in the Rubbertop Review, Pilgrimage Press, Crack the Spine Literary Magazine, Rose Red Review, and Persephone's Daughters (forthcoming).

She shares a Pinterest page with her sisters Alys and Katy at pinterest/alyswolfe and has book-specific playlists on Spotify as ceciwolfe.

She is currently working on the sequel to A Harvest of Stars (Starlight) and a contemporary re-telling of a Henry James classic.
Posted by Iola at 08:00