The South, American Football and Life 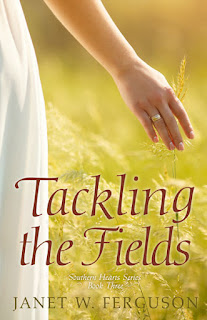 Congratulations to Janet W. Ferguson and the novel Tackling the Fields for taking home this month's Clash crown! We're pleased to feature this guest post, which gives us a little insight into Janet's book and football...yes, football!

In the South, most of us love football. It’s something we talk about, cheer for, and spend time watching with friends, whether in person or as a group viewing it on TV. The adrenaline seems to flow as the leaves begin to turn from deep greens to those fall yellows and oranges, a chill touches the air, and those pads and helmets are put on.

My husband played high school football. He was a center. I’ve always watched the sport at whatever school I attended, and of course, in Mississippi, a lot of us follow the SEC games. I never thought a whole lot about why we enjoy watching so much or about the injuries the players battle with—until my son played the sport.

His junior year, he tore his ACL and his shoulder labrum participating in this sport he loved. And he was not able to make a comeback. I saw the game through different eyes as he struggled with the loss. He missed the comradery, the goal, the discipline, the friendship. Everything about being a part of a team.

While he was going through three of four surgeries that he ended up having, I began writing Tackling the Fields. It combines this love for a game with the loss of a dream for one character and the loss of innocence for another. It was a challenging, almost painful, book to write. But in the end, God heals our wounds and helps each of us recover from our broken places.

He’s there to free each of us from the heartaches that try to take us captive.

Cole Sanders is a changed man. The university quarterback questions his direction in life after serving on a mission trip in Honduras. Things that used to fill Cole’s ego seem empty after witnessing the developing country’s extreme poverty and the death of a precious child. The one glimmer of hope through his confusion is the fresh perspective he now has about his tutor, Audrey. She possesses something beautiful inside and out—something that might help him become the person he wants to be.

University senior Audrey Vaughn tutored Cole Sanders for an entire year and never imagined the popular quarterback would see her as anything more than a friend. After partnering with him on the mission trip, they are drawn together. And he appears to have changed for the better. To let Cole into her life, Audrey will have to overcome not only her brother’s distrust, but also the paralyzing fear still lingering from a past she’s tried to leave behind.

Cole can’t walk away from Audrey now that they’re back in Oxford. He’ll have to figure out how to keep her giant of a brother, a lineman on his football team, from killing him when the coach has his back turned. But can Audrey trust her heart to a player so similar to the one who stole so much from her in the past?