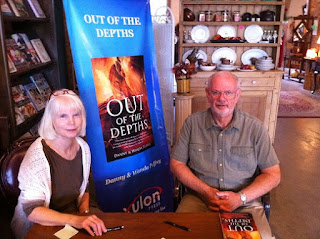 Danny and Wanda Pelfrey are longtime writers of non-fiction books in the educational and inspiration markets. They have for most of their lives been avid readers of mystery/suspense. AS A SHIELD and a previous mystery title are the result of a desire to entertain themselves and others as well as drive home important spiritual messages. Their passion is now “mysteries with a message.”


AS A SHIELD is one of four planned Davis Morgan mysteries set in a small North Georgia town. Davis, a pastor for almost twenty-five years, returns to his hometown after the death of his wife, to operate a rare and used bookstore. He is promptly appointed chaplain of the small police department and recruited by city officials to write a history of his home town. Mystery and romance seem always to be lurking around the corner for the popular bookseller.The reoccurring characters such as Charley Nelson, young police officer; Amy Morgan, Davis’s young daughter who is an English teacher; her roommate Deidre, who Davis is more and more drawn to as time passes; Miss Helen, the local historian and a host of others add to the fun and excitement.

A visit to little Adairsville, Georgia will surely be a memorable event for anyone who chooses to drop-in. In AS A SHIELD, Davis, through his encounters with two strange villains, comes to experience for himself the truth of Psalm 5:12, “For surely, O Lord, you bless the righteous; you surround them with your favor as with a shield.”


About the Authors: Danny and Wanda Pelfrey are a husband/wife team who in the past were active writers of non-fiction material, having, between them, cranked out several books. They are both graduates of Point University and Danny has a Masters from Kentucky Christian University. Danny has spent most of his adult life as a pastor and Wanda as a teacher.Their interest at present lies in the creation of mysteries with a message.

Danny and Wanda are the proud parents of two daughters and five grandchildren. They reside in a little Cape Cod style cottage in the small town in North Georgia that is the setting for their mysteries.

About the Book: Davis Morgan, having left the ministry after the death of his wife, returns to Adairsville, Georgia, his hometown. There he operates a used and rare bookstore while being appointed chaplain of the police department. He and Charley, a young policeman, after discovering the body of a tattooed man find themselves in a serious battle to bring justice to two strange villains who are threating the safety of Davis's daughter. While all this is going on, Davis is struggling with interpreting his relationship with a young history teacher who happens to be his daughter's roommate.
Posted by Iola at 08:00