I was super-impressed by Words, the first Ginny Yttrup book I read. The second, Invisible, was a little harder to get into. And Home was a little harder again. I know Words was partly based on Ginny’s own story, and I suspect part of Home is as well (a novel about a novelist? Who ends up writing a novel titled Home? It’s easy to see why I might think that).

I know authors are told, ‘write what you know’. And obviously, authors know writing novels. But I have to admit that I’m not a big fan of novels featuring novelists as main characters. I don’t mind novels about journalists or bloggers. But something about a novelist as a main character makes it harder for me to suspend disbelief—some novels have done it (Denise Hunter and Kaye Dacus are two, but their novels are fun romance. Home isn’t).

No, Home is a story about a novelist who’s having problems writing her novel, and who has a husband who is having problems with work—he’s a building contractor, and the work isn’t coming in the way it used to. Which means the money isn’t coming in either (I must admit, this was the part of the novel that didn’t work for me. He was a successful contractor until the Great Recession hit a couple of years earlier, they’d been living in the same house for twenty years—the house he built—and it wasn’t paid off?)

Home is told in first person point of view. This isn’t something that usually bothers me, but it bothered me with Home because it’s told from the viewpoint of several different characters, and I kept having to go back to the beginnings of chapters to work out who the viewpoint character was. I find it easier if first person is one character.

The result was it took me longer than normal to get into Home, and when I did, I found myself engaging less with Melanie’s story (the novelist), and more with the story of her neighbour and editor, Jill. I did get into Melanie’s story, and even into Craig’s (her husband), but it took a while.

And that makes it a hard novel to review. The ending was good, but it took a long time to get there. The writing was excellent, particularly in the second half, and there was a lot about Melanie I could relate to: 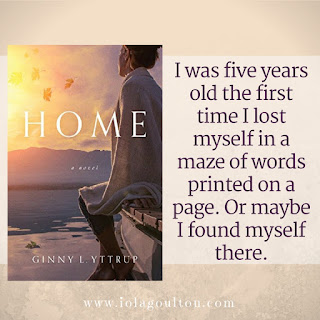 I also liked the quotes at the beginning of each chapter: 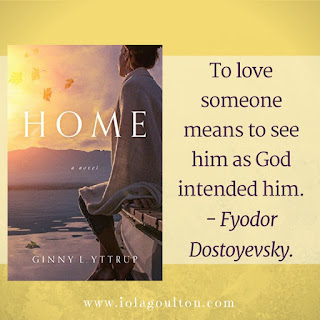 And I liked the way the characters, especially Craig, had a solid Christian faith: 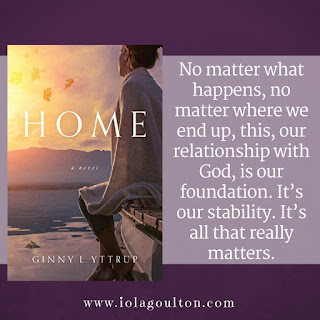 And I’m prepared to forgive a lot from a character who can say that. Overall, Home is a novel about loss and grief, and learning to cope with both. It’s uplifting and encouraging, but not a book to pick up if you’re looking for a light read.

Thanks to Shiloh Run Press and NetGalley for providing a free ebook for review. You can read more about Ginny Yttrup at her website.
Posted by Iola at 08:00