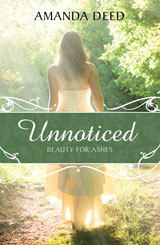 Plain Jane O’Reilly is good at being unnoticed. Detested by her stepmother and teased by her stepsisters, Jane has learned the art of avoiding attention. That is until Price Moreland, an American with big dreams, arrives in her small town.
Does she dare to hope someone might notice her?
However, Price Moreland may not be the prince that the whole town thinks him to be. Was his desire to be a missionary a God-given call, or just a good excuse to run from his past?
Complete with an evil stepmother, a missing shoe and a grand ball, Unnoticed takes the time-old Cinderella fairy tale and gives it an Australian twist. 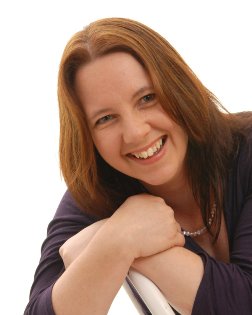 Amanda Deed has penned several Australian Historical Romances, including The Game, winner of the CALEB Prize for Fiction in 2010. She resides in the South Eastern Suburbs of Melbourne with her family, where she works full-time in her local church office.

Outside of work and family, Amanda loves to write stories filled with intrigue and adventure using her favourite themes as a backdrop: Australia, heritage, romance and faith. Her books include Unnoticed, Ellenvale Gold, Black Forest Redemption and Henry's Run. For more information, go to www.amandadeed.com.au.

Jane O’Reilly is our Cinderella figure, the unloved daughter forced to take second place to her stepmother and stepsisters—all ugly in attitude if not in looks. The description of Jane brings to mind a young Nicole Kidman, so she’s far from the Plain Jane people call her. But she doesn’t see that. She also doesn’t see that beauty is as much about who we are on the inside as on the outside, nor does she understand that God sees her and loves her for who she is. She doesn’t have to be beautiful.

Prince Charming is Price Moreland, an American who has left the country of his birth with noble intentions to bring the gospel to Australia. At least, that’s what he tells himself. But he’s soon distracted by Jane, who he thinks of as anything but plain. It’s good to see a romance where the hero and heroine both have personal faith journeys.

What raised Unnoticed above other fairytale retellings was the way the character histories were woven in. Not just for Jane and Price, but for Mrs O’Reilly (and her sister, the family cook), and Mr O’Reilly. It showed their neglect and mistreatment of Jane wasn’t because of any wrongdoing by Jane, but was a product of their own backgrounds. I especially liked the way I didn’t feel manipulated into feeling sorry for Jane’s parents.

The writing was solid, although there were a few places where it wasn’t as strong. But these are insignificant in the face of an excellent fairytale retelling with a unique historical Australian setting.

Thanks to ACRBA and Rhiza Press for providing a free ebook for review. You can find out more about Amanda Deed at her website, and you can read the introduction to Unnoticed below: