Noah Mitchell is less than impressed when he finds his ex-wife is actually still his wife—she forgot to file their divorce papers, so the divorce was never final. Now he has to get those papers filed to get the IRS off his back. But getting them filed means visiting Josephine Dupree Mitchell again—not something he’s looking forward to.

Josie knows how much Nate doesn’t want to spend time with her. And why would he, after what she did? So she decides to be helpful and save Nate a trip into town by driving out to his ranch to deliver the signed papers. She can get his signature, file the papers with the judge, and the divorce will be done. At last.

Only things never work out as planned, because a snowstorm hits as Josie arrives at the ranch, and she’s trapped there with Nate, the ex-husband she still has feelings for. Then things get worse …

Sweetbriar Cottage is a sweet (!) yet powerful exploration of the nature of unconditional love. It starts in the present, but has flashbacks to three and a half years ago, when Nate and Josie first met, and to Josie’s childhood—the childhood she never discussed with Nate. The flashbacks gradually reveal what she did—but they also show why she did it.

It was always obvious Nate was the one who had instigated the divorce, and this got me wondering why. How can you meet, marry, and divorce in just three years? (This seems unbelievably fast, partly because I live in New Zealand where it takes at least two years to get a divorce.) What had she done that he couldn’t forgive? And why did he marry a non-Christian in the first place? 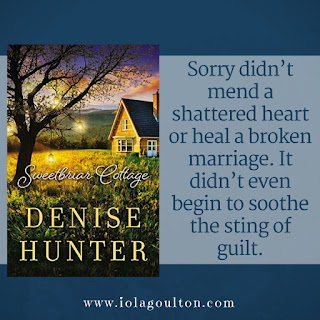 It was also obvious that Josie was one emotionally messed up woman, and that whatever she’d done was the result of her messed up teenage years (triggers!) and her subsequent belief that there is no such thing as unconditional love. Spoiler: there is. But that’s something they both need to learn.

I’d been a little apprehensive about reading Sweetwater Cottage, but it captured me from the beginning and never let up. A great second chance romance with some deep Christian themes.

Thanks to Thomas Nelson and NetGalley for providing a free ebook for review. You can find out more about Denise Hunter at her website.
Posted by Iola at 08:00