Irene Hannon at Her Best 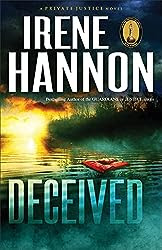 Three years ago, Kate Marshall lost her husband and four-year-old son in a boating accident, and Kevin’s tiny body was never recovered. She’s now re-established herself as a career counsellor for abused women in St Louis, Missouri, far away from the rugged New York coastline which stole her family. But one day she hears a small blond boy at the mall asking a man—his father?--for a Poppysicle, a word she’s only ever heard Kevin use. She loses the boy in the crowd, and when the police aren’t interested, she approaches Phoenix Inc, an upmarket firm of private investigators, for help.


Connor Sullivan is immediately attracted to his new client, something he’ll have to ignore if they are working together. She has a strange story, but one that bears investigating. The more Connor investigates, the more he comes to believe that Kate is right, and the more he wants to see of her. But can they find out the truth before their search is discovered?

I’ve found the last couple of Irene Hannon romantic suspense novels I’ve read a bit flat. There was nothing technically wrong with them, but they didn’t have that spark of inspiration and originality I remember from her earlier books. I’m relieved to report that Deceived is back to Hannon at her best. Okay, the first meet between Kate and Connor was probably more corny than cute, but the suspense plot was excellent (and the romance worked nicely).

It’s an ambitious plot. Was the boy on the elevator Kate’s son? If so, is the man with him involved? How exactly does a four-year-old “drowning” victim resurface as a seven-year-old half a country away? Where has he been for the last three years? Who took him? And why?

At the same time as Kate and Connor are searching for the truth, we see Greg and Todd Sanders, to all outward appearances a loving father and son. This, in my view, is the real strength of Deceived, because Hannon hasn’t depicted a cliché “villain” but a likeable and well-rounded character that I sympathised with. After all, if Kate is right, Greg and Todd are about to have their worlds ripped apart. Writing likeable antagonists is a real skill, especially when it comes to their motives, and I commend Hannon on the way she dealt with Greg’s backstory. When the full story came out, it all seemed horribly plausible. Recommended.

Thanks to Revell and Netgalley for providing a free ebook for review. To find out more about Irene Hannon, visit her website.
Posted by Iola at 09:00