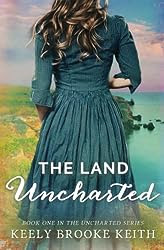 
Lydia Colburn is twenty-two, the unofficial doctor in the village of Good Springs, in The Land. She knows her profession means she’ll never get married, and she’s happy with that—after all, the only man in the village who has ever shown her any attention is Frank Roberts, who she finds disturbing. There’s no reason to suggest her life will be anything different until a stranger arrives from the sky: Lieutenant Connor Bradshaw, who has come from a place beyond The Land.

Connor is a naval aviator, ejected from his aircraft over the South Atlantic Ocean, and now rescued and resident on an uncharted island. How will he get back to his unit? Perhaps more importantly, does he want to? And can he prevent the outside world from finding him and The Land, and taking the precious resources?

The first part of the novel was setting the scene, introducing Lydia and the inhabitants and customs of Good Springs. While it was interesting enough, it did make the beginning rather slow as the plot doesn’t really start to take off until Connor arrives. We then get to see Connor’s confusion as he navigates this strange new land, his developing feelings for Lydia, and conflict with her protective brother--and the creepy Frank …

The history and culture of The Land was developed well, and without any uncomfortable information dumps. It’s an intriguing concept, an island that has always existed but can’t be seen by even the most modern navigation equipment. It also adds another layer to the plot: what would happen if the outside world knew about this paradise with healing trees, and no poverty? Especially given the outside world is at war over the kinds of natural resources The Land has?

The Land Uncharted is an enjoyable read, and I think the Epilogue suggests it’s the first book in a series. If so, I’ll certainly be looking forward to the next book.

Thanks to the author for providing a free ebook for review. You can find out more about Keely Brooke Keith at her website.
Posted by Iola at 09:00