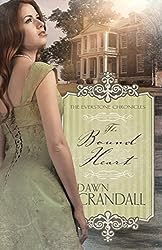 Meredyth Summercourt has been waiting for Vance Everstone to come to his senses, return to Boston, and marry her ever since their illicit liaison six years ago. But Lawry Hampton is back in town, and Meredyth finds herself attracted to her old friend … and he might just be in love with her as well, especially when they find out they have more in common than family background.

The Bound Heart is written entirely in the first person, from Meredyth’s point of view. While she is a reliable narrator, she’s also got some wrong ideas about herself, God, and redemption. Yes, she’s “ruined”, and she didn’t try and stop Vance, but that doesn’t mean she’s obligated to marry only him. There were times when I got quite frustrated with Meredyth, when she found out some things which called Vance’s character into question, but didn’t allow even these to sway her from her purpose. But I liked the way she changed, particularly towards the end of the story.

One possible fault in The Bound Heart is the character of Lawry. He’s almost too perfect. He’s been in love with Meredyth for years, yet he remains constant even though he knows she’s holding a torch for Vance. It would be natural to see him as a rather sad character, but instead he comes across as noble (in the same way as Michael Hosea in Redeeming Love by Francine Rivers
), and a study in the eternal constancy of love. My other issue was with Vance: the way he behaved towards the end of the story didn’t ring true for me.

Thanks to Dawn Crandall for providing a free ebook for review. You can find out more about Dawn at her website.
Posted by Iola at 09:00