Review: A Promise to Protect by Patricia Bradley

Even Better than her Debut 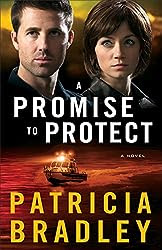 I enjoyed Patricia Bradley’s first novel, Shadows of the Past, but I enjoyed A Promise to Protecteven more. Both are set in the small town of Logan Point, near Memphis, but you don’t need to have read Shadows of the Past in order to read this. While I have read both, I have to admit I’ve read so many novels in between that I don’t remember the details.

Ben Logan has stepped into his father’s shoes as Sheriff of Logan Point, and trying to find out the truth behind his father’s shooting. Tony Jackson said he had information, but now Tony’s been shot, is bleeding out, and asking Ben to protect his sister. Ben agrees, despite his uneasy relationship with Leigh.

Dr Leigh Somerall left Logan Point ten years ago, basically run out of town by Sheriff Tom Logan, who didn’t see her as a suitable girlfriend for his son. Now she’s back with her son, working in the Emergency department of the local hospital and staying with her brother, Tony.

Ben and Leigh are both hiding secrets, Ben about his fear of children, and Leigh about why she broke up with Ben all those years ago, and married so quickly afterwards. There’s nothing like a good secret to keep the pages turning, and these work well. When will they admit they are still attracted to each other, and confess to what’s holding them back?

Intertwined with these secrets is the bigger suspense plot. It soon becomes apparent that Tony’s shooting isn’t an isolated incident. The only question is: who is the next target? Ben or Leigh? And why?

Overall, A Promise to Protect is the perfect blend of romance and suspense, and I’ll be looking out for the next in the Logan Point series. Recommended for fans of Dee Henderson, Dani Pettrey, and Irene Hannon.

Thanks to Revell and NetGalley for providing a free ebook for review. You can find out more about Patricia Bradley at her website.
Posted by Iola at 09:00