Review: A Brush With Love by Rachel Hauck 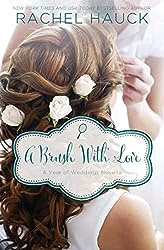 Ginger Winters was the victim of a horrible accident when she was twelve, and it’s forever changed her opinion of herself: she is not beautiful and never will be. But she can see and display the beauty in her friends and clients, which she does in her job as a hairdresser in her new salon in her hometown of Rosebud, Alabama. She rarely dates, and still hasn’t quite forgiven Tom Wells for standing her up twelve years ago, even though he had a perfectly good excuse: his family left town that night, and haven’t returned. But now Tom’s back, and keeps hanging around …

I’m in two minds about A Brush with Love. I enjoyed Ginger’s internal emotional and spiritual journey. As well as believing she’d never be beautiful, she also believed she wasn’t good enough for God—a lie too many people believe, an important issue to address, and one A Brush with Love deals with well (if a bit too quickly).

However, the romance didn’t work for me. The story didn’t convince me that two people who hadn’t seen each other for twelve years were a good match in the present (especially when one was a pastor and the other barely believed in the idea of God), it seemed that Ginger’s big personal revelation should have come in the middle not the end, and it felt as though all the romance actually happened between the end of the last chapter and the beginning of the epilogue.

This was a novella, but I really think there was too much plot and character development to cram into such a short space. It should have been a novel—that would have given the characters sufficient chance to develop and change.