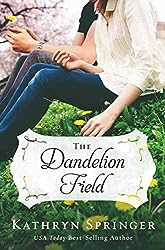 Gin Lightly and her daughter, Raine, have been living in Bannister Falls for Raine’s senior year of high school, after their car died on their way to nowhere in particular. Now Raine has dropped a bombshell which might mean they are here for longer than planned …

I had a slight hitch with Ginevieve’s name at first. I thought it was an alternative spelling of Guinevere (pronounced something like Gwyn-ev-ere), yet her nickname is Gin. Yes, just like the drink. Any sympathy I might have had for Gin’s fictional mother giving her such an awful name went downhill when I found out Gin named her daugher Raine. Raine Lightly. Ouch. Mind you, I’ve known a couple of people in real life whose names were no better.

Anyway, what about the book? In a word, excellent. Unplanned teenage pregnancy isn’t an easy subject, and it’s not one that I’ve come across much in Christian fiction. The Dandelion Field dealt with it well, and I would hope that the supportive church environment Raine and Cody were in was typical (although I fear it isn’t). I particularly enjoyed the growing relationship between Dan and Gin, an unlikely couple at first introduction, yet a couple who deserve their happy-ever-after.

Besides the romance, I found The Dandelion Field a fascinating looking at the two women, Gin and Evie. Both were teenage mothers and are now single parents. The difference is Gin’s always been a single mother, having been dragged up by a single mother who kicked her out when she got pregnant and her boyfriend dumped her. She’s never been financially stable, but has done her best to give her daughter a love-filled upbringing, even if they did move around a lot trying to find something better.

Evie did everything “right”, in that she got married first. Her husband died, which at least left her financially secure enough that she’s living in a house with a car that runs reliably, and isn’t scraping for every dollar like Gin is. Yet she has her own issues, particularly that she’s never really moved on from being the widow who relies on her childhood best friend, Dan, to be at her beck and call. As a result, Cody hasn’t really grown up without a father figure: he’s had Dan and all the other firemen. Raine has had no one. Cody has been raised in church; Raine hasn’t, and for that reason Evie blamed Raine.

My one problem with The Dandelion Field is that some things were a little too perfect—Cody was the perfect guy (except for this one mistake), but even that he managed perfectly. He was supported by a perfect church, and perfect friends. Okay, they weren’t really perfect, perhaps just a little less flawed than normal people. In fact, the only imperfect Christian was Evie.

Thanks to Zondervan and NetGalley for providing a free ebook for review. You can find out more about Kathryn Springer at her website.

This book counts towards my 2015 Reading Challenge as a book published this year.
Posted by Iola at 09:00